Common or Garden, but mostly Garden

Well, as you might have figured, if you were of a mind to ponder these things, I do quite like to try out things I haven't tried before in the area of polymer clay bead making. Not implying that these things are in any way innovative or exciting you understand, just things I personally haven't tried before. Being relatively new to the medium makes it quite easy to find these new things to try. I haven't got even close to exhausting the possibilities of the material yet so I can have a small time, not much effort creative thought, put it into practice and see what happens. All nice and unpressured.

You may or may not be a gardener of sorts. If you are, you may know of a plant known by the name of 'Globe Thistle' or by the latin name of 'Echinops'. It's a perennial herbaceous border favourite that stands about four foot high or thereabouts and has rather wonderful round, spiky, ball shaped flowers, or rather multi flower, ball shaped things which must have a technical name, but I don't know what it is. They can be blue or white.

When the autumn comes, and the flowers have gone, the ball shaped multi flower becomes a ball shaped multi seed head, and when the seeds have dispersed, a much smaller, (3/8"-ish)still spiky core remains. That is the thing I had in mind as a texture tool. I have several of them that I snapped off. 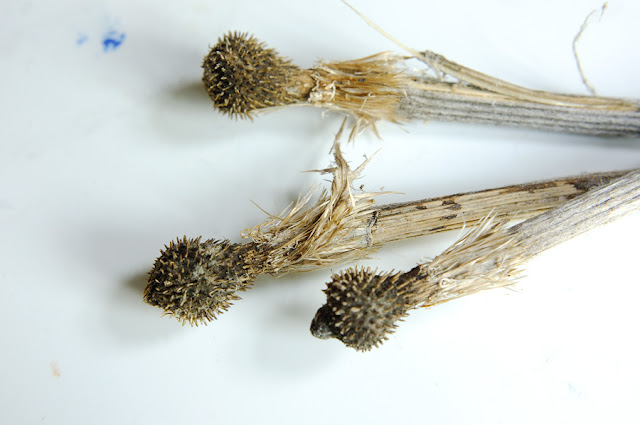 What I did was take a bead size ball of Polymer Clay and roll the echinops head around one end to make a textured area. Then I baked it. The bead, not the echinops. . .

The other thing I hadn't done before was selectively paint on Poly clay beads with alcohol inks, or anything else for that matter, so I painted a base layer of red, for the textured area, and yellowy green for the rest. When that had dried, I painted some stripes in yellow, I like the outline that appears when you paint alcohol ink on alcohol ink, and the fact that a new layer of ink tends to replace the previous colour rather than sit on top of it. I thought the result of the texturing and the painting was quite nicely organic looking, like a sort of unthreateningly alien acorn or somesuch.

As you can see below, I made some other ones, using a different texture tool. Those ones look as though they should be edible, like a bizarre sort of canapé or finger food. . .
I drilled a 1mm hole down the length of them, as I thought they looked like something someone might put on the end of a headpin. But whaddoiknow? ;-)

Well, the next step is to stick them up in my shop and see what the reaction is. Since the new year things have been eerily quiet on the selling stuff front. I suspect that it's the after effects of holidays spending and not that everyone hates my work. . . Whichever it is, I am undeterred, and listing stuff every day. Hah!
Jon x 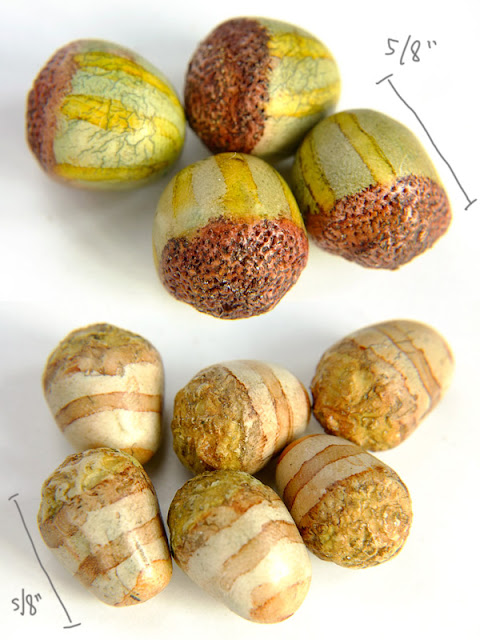 Well, Christmas and New Year and stuff got in the way didn't it? 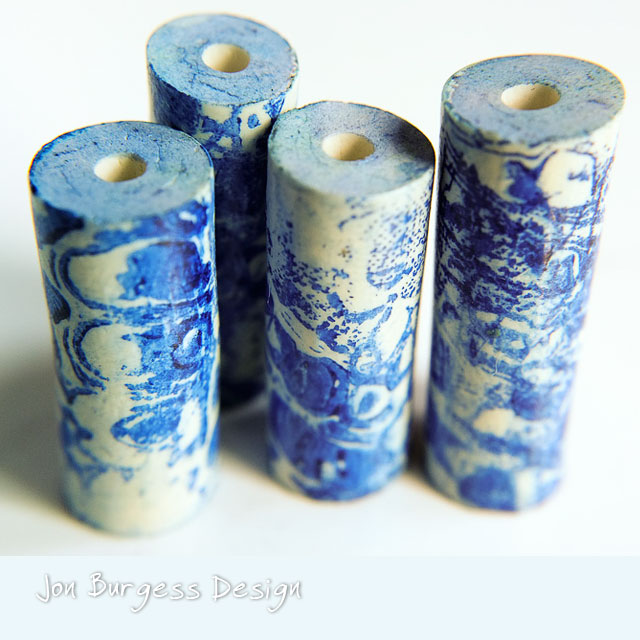 Kind of a long time between posts I know. But never fear, I am still here. Large as life and twice as ugly, as the saying goes, though of course that saying is referring to somebody very unlike me, oh yes.
Anyway, I hope you had a good holiday season and a good new year. Mine was nice. Three F's - Food, Friends and Family.
It was particularly hard to get back into the swing of things this new year for some reason. Christmas being on a weekend, and the new year tying up the next weekend didn't help. But I am back in a modified form of 'work mode' now and have been making stuff.
Despite previously talking about not making loads of beads, and instead, making some jewellery pieces, I have been making loads of beads. . . Yeah, well, I am going to follow my inclination in 2016 and let the second guessing and planning go hang. I am 'following the fascination' after all. Of course my inclination might change, and I might want to actually do the second guessing and planning thing, but only if I feel like it and it feels good.
I am lucky in that I am not making beads and jewellery as a way of making a living. I would like to increase the amount it makes me but it is only part of my (modest) income stream so I can play the self indulgent artist with a bit more freedom than some. And anyway, a lot of advice out there urges artists to please themselves before trying to please others, and that way attract a genuinely interested audience. I can see the logic there. The basic drawback being the hows and wherefores of attracting said audience. 'Marketing' I think it is called. I find it hard to raise my feelings about marketing above 'necessary evil' status I'm afraid, but I shall keep trying. There has to be a way that suits who I am better than bugging people on FB etc.
OK, so where are the pics of these beads I have been making? thought you'd never ask.
Here you go.