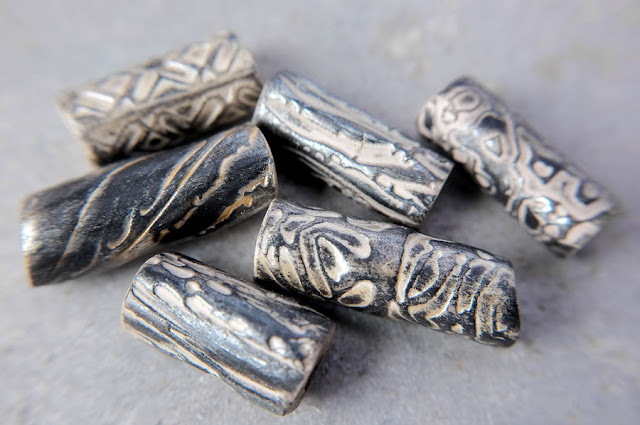 I only noticed the other day, quite by chance, that I had reached an interesting landmark. It was four years ago on the 3rd of October, that I made my first bead sale on Etsy. (and probably about six months before that, that I had encountered my first bit of polymer clay) The beads in the pic were the ones I sold, and the buyer (from the West Coast USA) rejoiced in the rather wonderful surname of Carefree Buffalo. . . Not the sort of surname you get in the UK ;-)

It only occurred to me later that this might be a native american name, but the image of a carefree buffalo skipping over the prairie, probably wearing my beads, still makes me smile.

Well, my Etsy shop is still chugging along four years later, on about 1200 sales now, and making beads has become a important part of my life, from being something it would never have occurred to me to get involved in. . . Life huh? ;-)
Well, I've long ceased to worry about how I got Here from There.
Embrace the randomness is what I say! 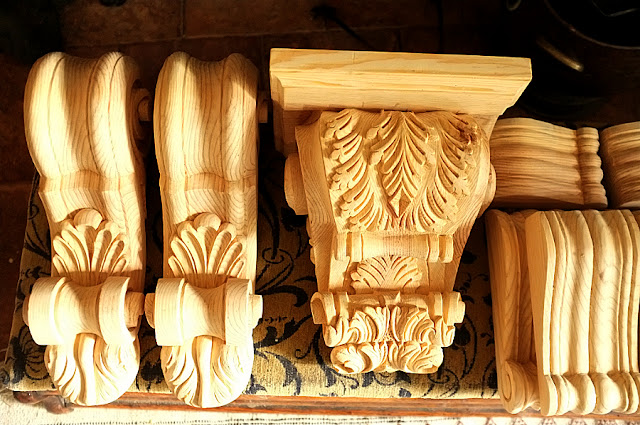 On the domestic front, I have been planning our living room makeover for a while. We are going for some fancy wood panelling on the wall round the fireplace, complete with some fancy wooden corbels and bits.
The trouble is that even when you know the dimensions of the things you are ordering, it still comes as a surprise just how flippin big they are sometimes. The wonderfully ornate one in the middle is 10 inches by 11-1/2, which is pretty impressive. It will look amazing, if somewhat over the top.

Still, us pretentious arty types with high falutin ideas aren't afraid of going over the top on occasion. . . It's going to be at the faux baronial end of the Georgian scale, if you get my drift, All dark wood and knotty grain. . . 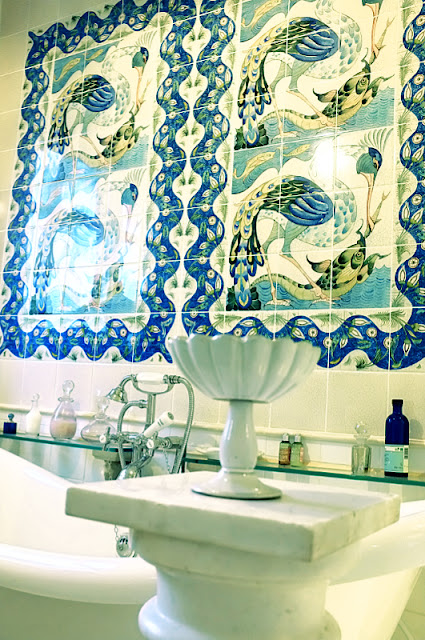 Still on the domestic front, it's a big front. . . Here is what we did to the bathroom.
The tiles were made by me with my heat press etc. The image is a copy of a William De Morgan tile design that my wife painted very large. I photographed it, sorted it all out on Photoshop to result in a three by three, nine tile design with single tile width edging. The tiles even have a crackle glaze effect, done in photoshop using a photo of a crackled dish of my wife's superimposed over the individual tile images.
And I did the tiling too. . . I impress myself sometimes! Not too often, mind. 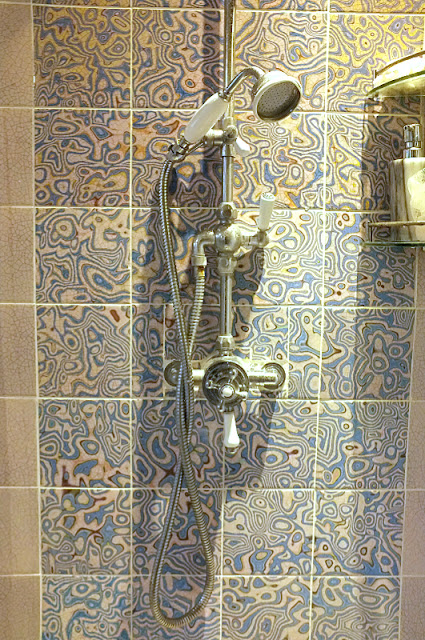 Staying with the bathroom for a further moment, here is my digital fractal based shower tile design. It's a continuous image representing water in an abstract way. That was another learning curve.

Before I actually got round to tiling the shower we made do with bubble wrap stapled to the plasterboard wall. . . nice. . .

Cats -
The three cats we adopted as kittens about a year and a quarter ago are in fine fettle. Now the weather has started to get a bit colder and wetter (we don't half need the rain! It's chucking it down as I write) they spend a lot more time indoors. I sometimes think they are too confident and well adjusted. There are three chairs round the kitchen table and the selfish little beasties are far too relaxed to worry about where I'm going to sit, fah!

Actually they are joy. Happy, affectionate cats. We love 'em to bits ;-)


OK, the bit you have been waiting for, maybe. .  the Beads/Drops/Dangles/Thingies. . .

My supply of unemployed beads is still going strong, although I am looking forward to the day when I start making some new polymer clay things instead of sparking ideas off already existent ones. I'm still experimenting and learning, and people still like what I am making, so I am happy.


Wiggly wire is a new departure 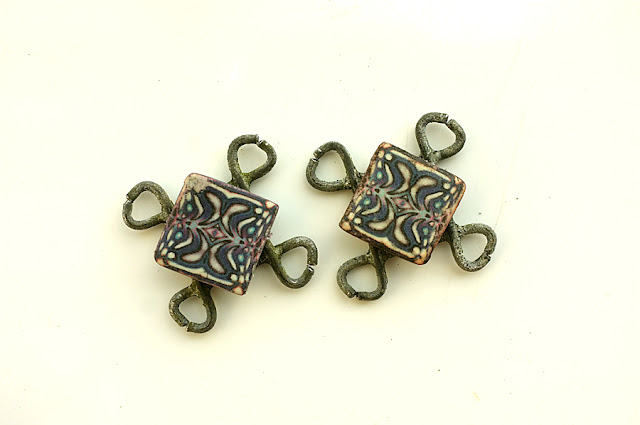 Image tiles and looped wire 'flowers' is another 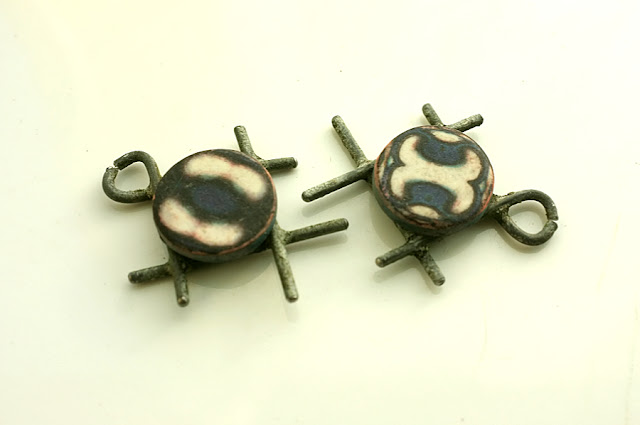 With it's subtle variations

And the idea of hanging shapes from bent wire constructions was another one I liked.

So, as you see, life potters along in an enjoyable and satisfactory way. What could be nicer? ;-) 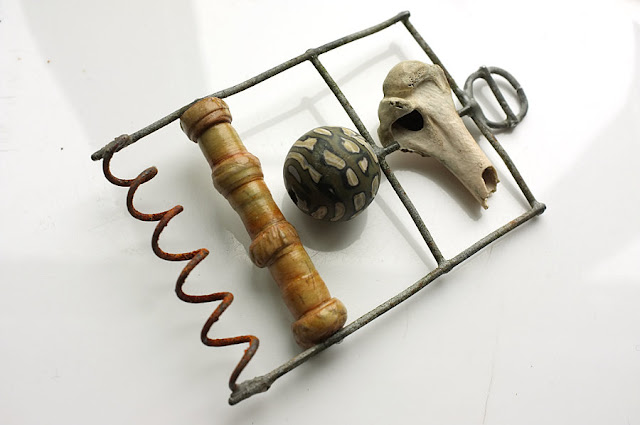 It's funny how being busy creating stuff cuts down on my time and motivation for blogging. I feel like I have very little to say other than "Here's my new stuff, hope you like it." . . .
So far my fan base, if I am allowed to call it that, has been very supportive. Most things that I make and list, sell, which is why I have been busy creating stuff and not blogging. . .

I still find myself strongly responding to old/unemployed beads and found objects, so I haven't been experimenting with new poly clay things lately. I have some ideas backing up in my head, but they will have to join the queue of ideas there already. 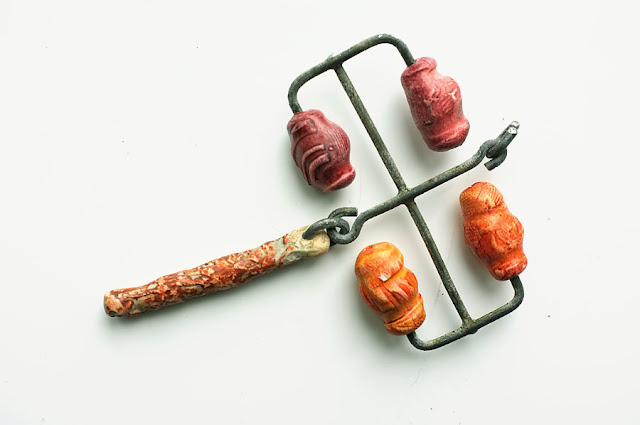 Actually, 'Queue' is the wrong word really, it's a bit more anarchic than that. Whichever idea pushes it's way to the front tends to prevail ;-)
At present, things involving upcycled wire with objects attached seems to be my primary output. There is a lot of mileage in it, so I expect it to be my primary output for a while, but who knows how I may feel in the future? 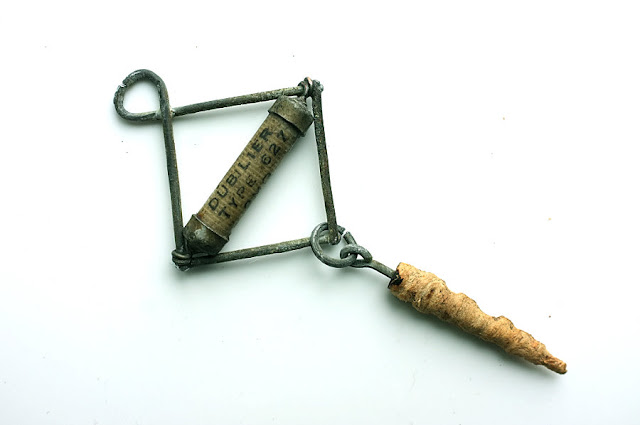 I still have a supply of unused beads and electronic components to spark ideas from, so I imagine they will keep me going for a while yet. People seem to like what I do so that also encourages me to continue down my particular avenue. 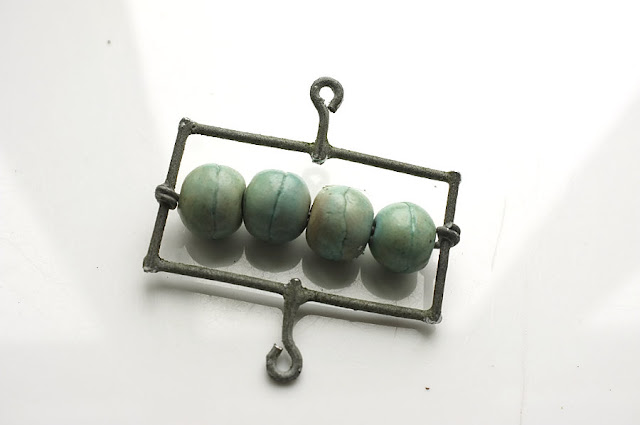 Connectors is a new departure, though well within the aforementioned theme. . . Things in frames and the relationship between them is still a theme too. 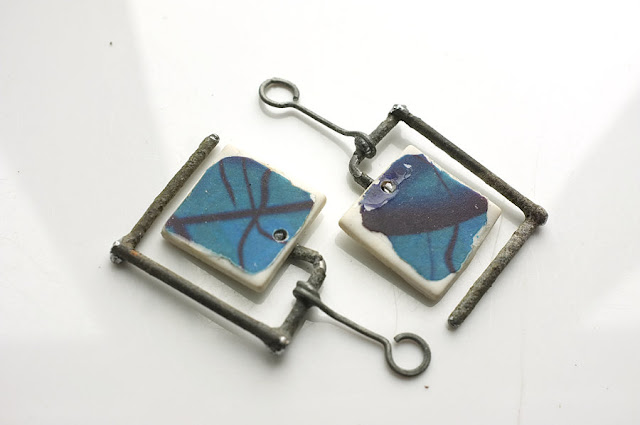 Asymmetry and offset beads is another thing I still find interesting. It's also a nice way to use image transfer beads that I really liked but that never got much interest as beads in themselves. 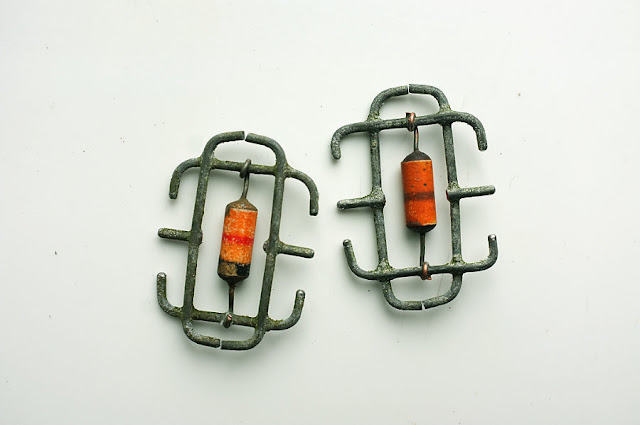 Electronic components in fancy frames is a new variation too. They are so bead like, especially the ones in cool colours. 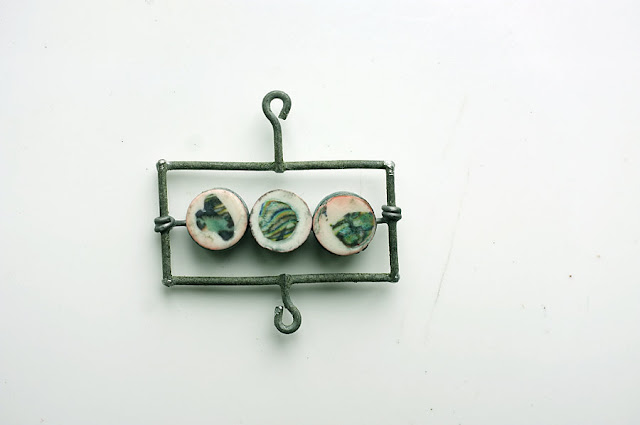 A wide frame gives the opportunity to explore repetition, which is something I am interested in too. These small, double sided, chunky, image transfer disk beads got repurposed in this framed connector thingy 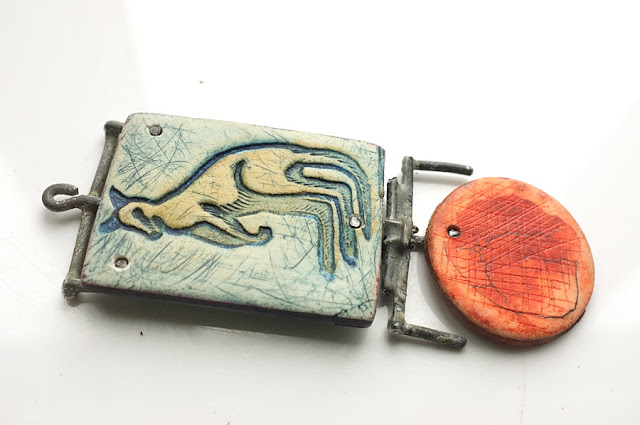 And this Kangaroo bead I made a while ago using a retro rubber stamp from an old set I found in a charity shop got repurposed. I could never work out quite what to do with it before. It might still be less than useful, but we shall see. Maybe it will be big in Australia. . . 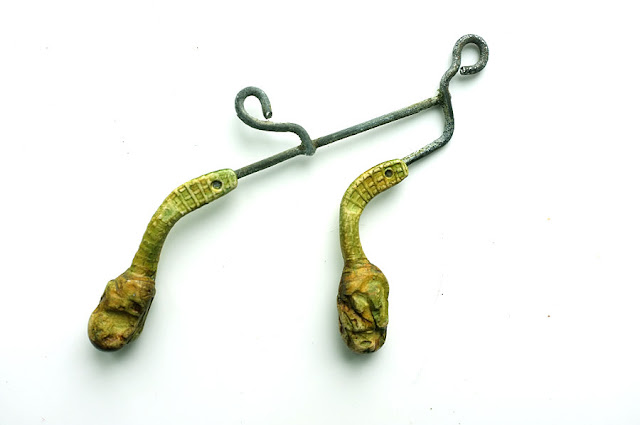 I'm still letting eccentric suggestions have their day. I have no idea what this is, but the organic beads and the bit of left over wire seemed to want to be combined somehow. Go with the flow, is what I say ;-)
Hope you enjoyed the pics and apologies for my lack of things to say. Maybe my art can speak for me even though I have no idea what it's saying . . .
Posted by Jon Burgess Design at 01:49 1 comment: