Well, it's been a funny couple of weeks. Not funny as in deeply humorous, but funny as in a bit odd or not like one would expect. Though a bit of humorous crept in too for light relief. Nothing all that exciting really, which is why I haven't blogged about anything for ages. But in the interests of keeping this whole thing going, I can just about scrape together enough mildly riveting things to keep you amused. Probably.


My trusty, or up 'til now trusty, camera suddenly developed a fault. The on/off switch thingy had been very sticky for a couple of years at least, and I guess the extra strain involved in turning it on and off finally broke something. Just in the middle of a bead photographing session too. So I have a few beads with no photos to show scale, next to a ruler, as per my usual procedure.
Anyway, after ringing up a few camera shops I tracked down somewhere that actually repairs cameras rather than just selling them, and drove the 50 min to get there. It was touch and go as to whether Fuji still sent out the relevant parts needed to fix it, but eventually it transpired that they did, and I will have a large bill to pay. Annoyingly, not quite large enough to warrant me getting a new (to me) camera of the same type instead of paying for the repair. Oh well, I can claim it off tax as I use the camera mostly for product shots these days. . . I'll have it back in 10 days or so.


Mechanical Breakdown 2 - The rusty and trusty sit-on lawnmower that came with the house, as the previous incumbent was moving to a smaller place with no need of such a thing, and we would need it to deal with the big lawn, also developed a fault. The height adjustment was stuck. It was fixed quite easily, but we had to call someone in to do it. As it was such an old beast, we had to get an agricultural machinery guy in to sort it. Modern lawnmower repair men wouldn't know where to start with a 40 year old machine. Hah! It's proper lawn mower, in that particular shade of green that garden machinery and metal playground equipment like slides and roundabouts used to be, you remember. . .


Anyway, talking of on/off switches, the forums over at Etsy are in turmoil at the moment. A great many shops are complaining about their views and sales suddenly stopping, as if there was an off switch that had just been thrown.
Sellers moaning about low sales on Etsy forums is certainly nothing new, it's one of those 'death and taxes' type constants, but the scale and intensity of complaints this time does seem to be much higher than usual.

Coupled with the lack of views/sales is the state of the search function. From what I read it is really not fit for purpose, throwing up hundreds of items not really related to the search terms at all. Sellers feel that they are just not being found, through no fault of their own. They feel that there has been too much tinkering behind the scenes by coders and suchlike people.

Also, to add another layer of resentment, it seems that Etsy HQ is one of those kind of corporate hippy places you hear about and roll your eyes. There are Yoga rooms, free organic gourmet food a couple of days a week, a communal loom and something called a 'breathing room'. And that's just for starters. . .
Obviously oodles of money has been spent on such organic fripperies. This metaphorically chafes the collective rear ends of the sellers, including me, who have been paying Etsy listing fees and percentages of sales only to find that the employees have been lounging about in breathing rooms, belching organically while buggering up the search function completely. The money could have been better spent, one feels.


To add yet another layer of resentment to the ferment, as if one was needed, the ousted CEO, before he was ousted, had made a seemingly strange comment that he saw Etsy as a 'Tech Company'.

Eh? . . . Mulling this over, I eventually came to an understanding of what he might have been on about.

You may think that a site that sells things is primarily just that, a site that people sell things on. Well, when you get to the scale of Etsy, (and Amazon and Ebay etc) issues of server size come into play. They have a certain amount of server space in which to accommodate a very large number of things/shops. So what they allegedly do is rotate the visibility of said things/shops as that is much cheaper than paying for more server space. Sellers have been suspicious of this for years but any evidence is circumstantial. . . Etsy says nothing. . . The 'tech company' comment could well have referred to the possibility that Etsy staff might be employed to write algorithms that enable this rotation to happen in supposedly non obvious ways, and the idea that Etsy would then sell on the resulting algorithms to other companies who require such things. So Etsy could perhaps be seen by those of a cynical disposition, as just a sandbox in which coders could test their algorithms. Sellers being relatively unimportant. . .


It also turns out, according to said ousted CEO, allegedly, that Etsy makes more money from listing fees from hopeful sellers, than it does from actual percentages of sales. Leading to conspiracy theory number two, that Etsy manipulates shop visibility in order to encourage sellers to keep on listing, and for new sellers to buy into the dream of giving up their day job and successfully selling their work instead. The idea being that the manipulation of sellers visibility allows them to just sell enough to keep going and to keep listing, and not notice the down times as anything other than the ups and downs of retail life. Give 'em just enough to keep 'em sweet. . . All very cynical. Who knows what the truth of it all is, but there are a great many upset sellers on those forums. . . The new CEO may or may not be inclined to address their concerns. Time will tell. But by then half the sellers may have left. . . Including me. . .
Until next time,
cheers,
Jon x
Posted by Jon Burgess Design at 11:44 5 comments: 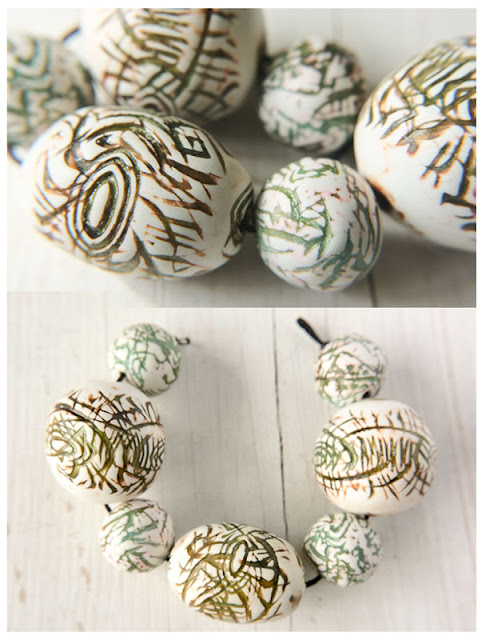 Well, I've been keeping half an eye out, in the local charity shops I frequent on a fairly regular basis, for cheap wooden necklaces that I could deconstruct and repurpose the components of. I found a couple of good ones the other week, big wooden beads, some round, some oval, and a bunch of smaller beads for good measure.

So I tried covering them with a layer of polymer clay, then texturing the heck out of them using one of my own design and own manufacture texture sheets. I baked them and unfortunately went a bit nuts with the alcohol inks. Too nuts, even for my high nut tolerance. . . Frankly, they were a mess.

So after a couple of moments reflection I took the JBD nuclear option and sanded the bejazus out of them, turning them back to white, leaving only the deeper grooves to provide a darker relief pattern. They actually came out rather nice. Which goes to show that knowing when to keep going is as important as knowing when to stop ;-)
See? Polymer Clay has important life lessons to impart. . 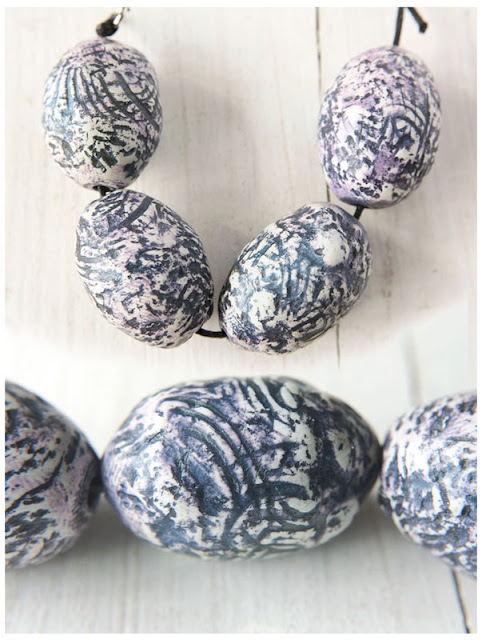 For the next set of beads I just went with the texture/paint/sand madly process from the get go. They turned out OK too. One to store in the mental technique library.

I also revisited the Kato Clear Liquid Polymer Clay as varnish technique on some simple bicones. There is a cool, simple trick to get a distressed looking surface such as that seen on the beads above, but I'm not going to tell you what it is. . .

I can tell you about the brown ones however, I mixed a small amount of sepia acrylic ink in with the varnish. They didn't come out quite how I wanted but they came out well enough for me to do some more experiments with colouring varnish.

Talking of varnish, it makes all the difference to the faux ceramic effect as seen in the so called 'candlestick' beads above. They remind me also of chess pieces. Ooh, polymer clay chess pieces! Must have been done surely. . hmm. . .

Anyway, outside of claying and diy activities, we have been exploring a few bits of our local city, Norwich.
The Castle Museum is fascinating, and is already providing food for my instagram feed, (see what I did there?)

Amongst it's treasures is a room or two of stuffed animals.

I find these collections of stuffed animals and birds fascinating. It's an appalled fascination, brought on by the tragic absurdity of these long dead shells of animals, and by the strange thing that happens when you photograph them. Because a photograph freezes motion, and a stuffed animal has been presented in its own eternal frozen moment, a photograph of a stuffed animal has a certain ambiguity to it. In a strange way the photo is more alive than the object, the animal gets given a kind of life by being no different in a photograph than it's living brethren. It is kind of elevated to the same plane somehow, if that makes sense. . . which is where the absurdity comes in, and the surreal humour and tragedy also. . . I could go on, but I don't have time to construct a proper explanation of what I mean but I hope you get the drift ;-)

Oh yeah, we are down to just one duckling ;-(
Also, of the three goslings hatched a day or three ago, we have just one, that was with four geese to guard it. . . sigh. . .
Oh well, I hope they are still around for the next blog post.
Jon x