I took some bits and pieces from my 'pending' beads, the ones that are hanging around waiting to be photographed and listed, and a couple from existing listings, which I shall take down if and when, and tried a few relatively spontaneous ideas for pendants. Using my animal zoo stamp tile type things I mentioned in my previous post. I quite like them, and might be moved to try them out in my shop very soon. I need to play with the zoo stamps some more, definitely, however I keep getting distracted ;-) 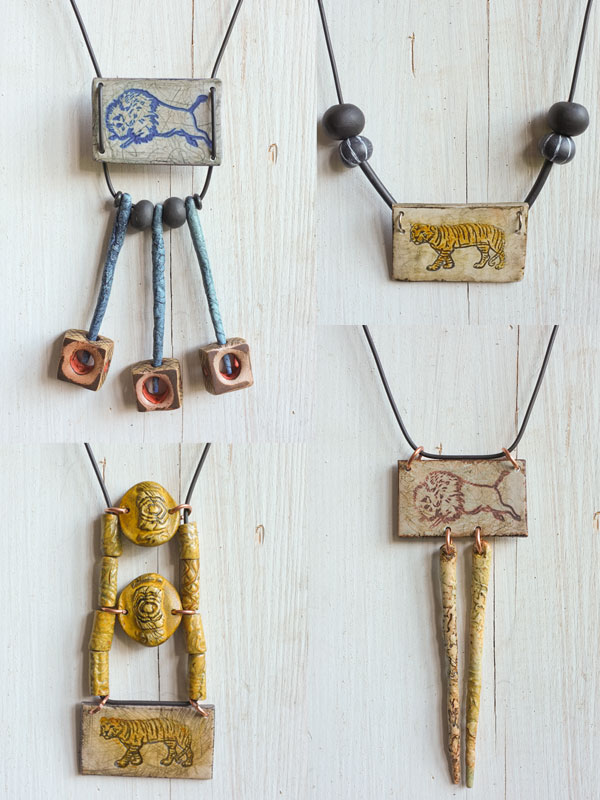 I made some quite cool heavily textured spikes, that look fun. . . 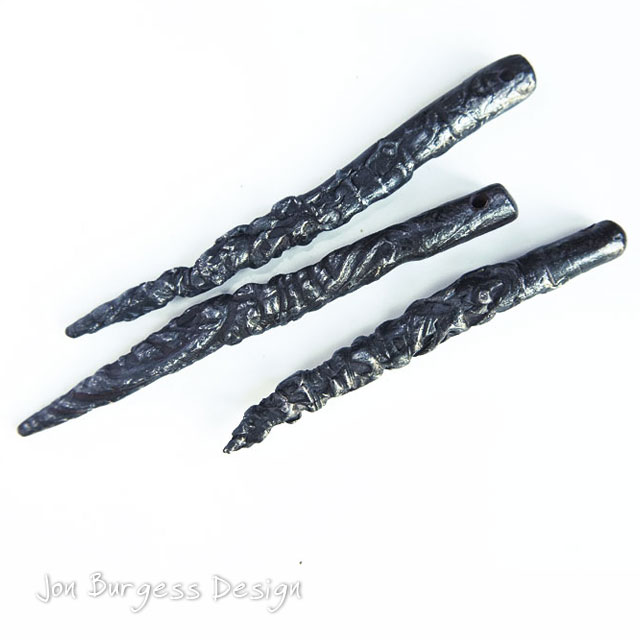 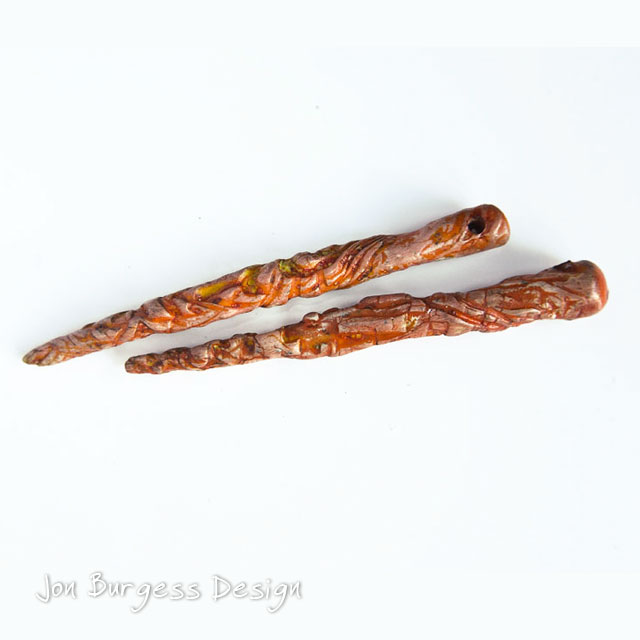 and I shall continue to mess around with stuff. I have more ideas than time, which is the right way around I think.
cheers,
Jon x 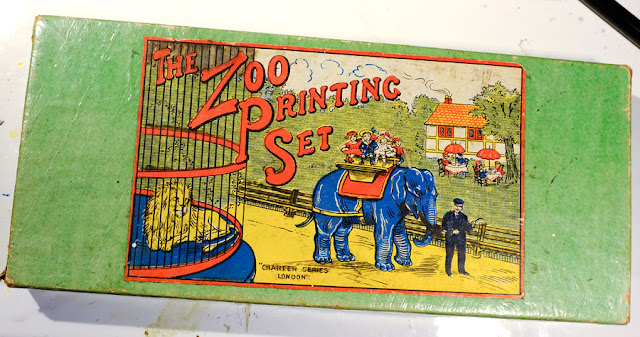 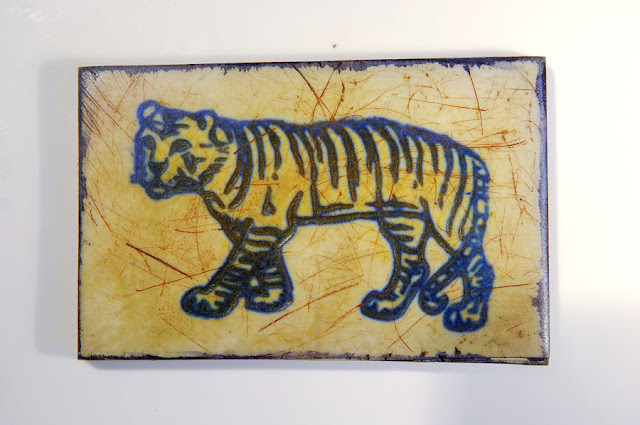 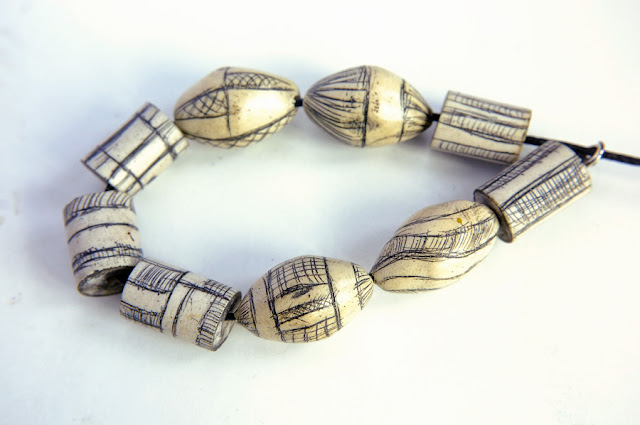 Apologies to A Tribe Called Quest for the title. (I think that's who it was. It was a while ago. I feel old now. Actually I felt old anyway. . . ;-)   )
In my search for the authentically rustic, if such a thing really exists, I like to go really simple. What is one of the most basic ways of getting a design onto a bead? Yup, scratching it into the surface, that's what. I have messed around previously with this process, but with limited success. I scratched a design onto a a bead that had been covered in black gilder's paste, which looked nice, white design on black, but didn't like renaissance wax being added to the mix. Gilder's paste and ren wax don't get on, the wax takes the paste off unless you apply it oh so carefully.
Actually, the ones pictured below were unwaxed. Embarrassingly, the gilder's paste on it's own was not very robust, as I found out after having sold some. (Sorry Claire, lesson learned. .) This was a good while ago I have to say. 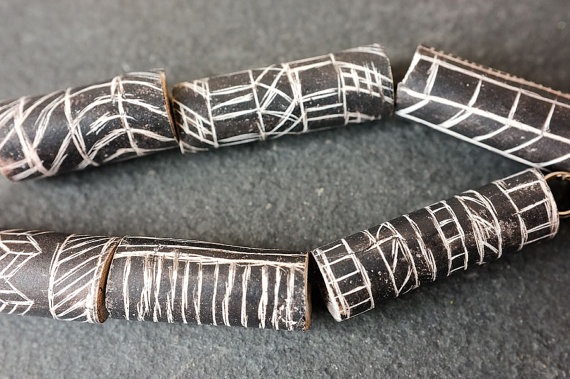 So I tried scratching a design onto baked white clay, and then filling the scratches in with black ink or wax or whatever. I found that scratching into white clay with my trusty craft knife blade thingy, (one of those snap off multiple times ones, you know. . .) that I found it hard to see what I had been doing, being white on white and all. Painting the bead with dilute alcohol ink first helped to show what was scratched and unscratched, so I did that. I tried a few ways of filling the scratches with black. First, oil pastel, rubbed into the scratches, then 'fixed' with a heat gun. I thought it might melt into the scratches, but it didn't do it very well. I sanded the excess off to reveal the scratches and sealed with ren wax. Ren wax hates oil pastel too so things got a bit smeary. I tried black chinagraph pencil, as I had found a box of them for £1 in a local charity shop the week before. Same result really, only ren wax really hates chinagraph pencil.
What I did was to make use of the ren wax's tendency to dissolve gilder's paste, and apply g paste fairly generously, then use ren wax to on top and rub the resulting black stuff into the scratches. Then let it dry and sand off the excess. Ren wax on top was fine if applied fairly quickly without rubbing too much.
In hindsight, the easiest way might be to use black alcohol ink and sand off the excess. Ren wax is OK with alc ink, not best friends but ok. In future I will also try black acrylic paint or acrylic ink I think. Anything black that gets into the scratches will do the job though. 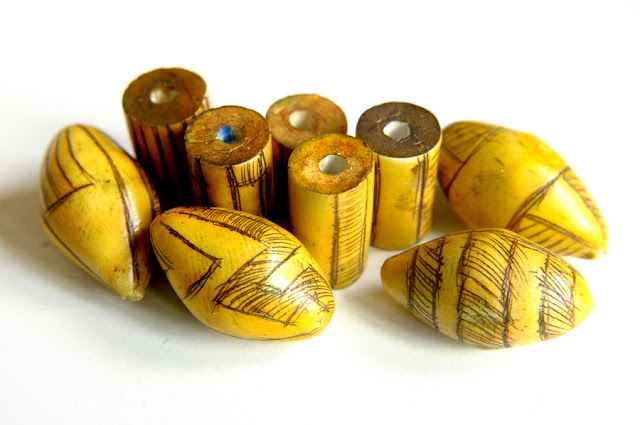 You could use dark brown alc ink, as in the examples above, and then paint with a lighter colour.

I like the result, only I worry that they are on the verge of looking less like arty 'primitive' beads, than ones that have been attacked by a ham fisted eight year old with attitude. Are they too 'crude'? They could be done with more 'care' but I am not sure that is the point of them. Their crudeness and simplicity 'should' be what gives them their charm. I may be wrong though. What you guys fink?
Jon x
Posted by Jon Burgess Design at 03:09 7 comments: