Trying Something New, Actually Selling Stuff, and The impending Doom of Innocent Voles. . .

Well, it's been an interesting week and a bit. To me anyway ;-)
I've been musing and muttering in my own inimitable way about Facebook groups and whether to try to sell my beads in them, for months, without actually taking the plunge and just doing it. I mean, why would it be any better than listing stuff in a shop? etc. . . Well, if you don't try it, you never know do you?

So I took the plunge and just did it, and blimey, it's been a bit of a revelation. You know all those people who give advice online about how to set up a successful shop and how to make sales, and how they always bang on about 'finding your audience'? ('Huh! Easy enough to say' was always my cynical response. .) Well I think I just found mine. . .


I sold a very encouraging amount of things almost straight after listing them, which has not been my experience with my online shop, that's for sure.
There is something about an auction format that adds a sense of urgency to the selling process. People  are there to buy things and they want to get them before somebody else beats them to it!
Which is all good for sales and for the ego of the seller. . . Let's see how it progresses from hereon. .


I've been playing with my turned effect technique again. I am having too much fun with it, obviously. I have taken to putting large oxidised copper loops at the tops of my beads rather than having them as through drilled tube type beads. I think this adds a sense of purpose to them. They are definitely earring charms, or maybe pendant necklace focals if they are larger beads, and there is no ambiguity about which way up they should go.

I am coming to the conclusion that giving people too much choice in how something can be used can backfire on you. Certainty is good. Of course I may change my mind about that in future, but this is my position for at least the next twenty minutes. . .


Cat stuff - The girls have had their final post neutering check up and are fine. Which means they can go outside whenever they like and decimate the local vole population with their brother. I expect at any minute, a petition from disgruntled owls (Owls of Protest) complaining about their supply of voles being drastically reduced by these feline interlopers. Well, they have had it good for a long time, they will just have to get over it.
The cats are not kittens anymore, they may behave like kittens still, but they are getting big, especially Hereward, (referred to as Hairy or Fat Boy) who is getting to be a big handsome beastie. I can't imagine life without them now ;-)
Ay well, more DIY is calling me. Fake panelling the landing, and then taking a deep breath and tackling the bathroom! Eeek, what have I let myself in for? . .
Jon x,
Posted by Jon Burgess Design at 08:48 1 comment:

I went along with my work to the Craft Soc application event, (see my last post) which was part of their AGM. The two other applicants had dropped out so I was the only one. I did answer a lot of questions about my process etc and had a very good buffet lunch so had quite a nice time. But the day after, I got an email saying that my application hadn't been successful.

It was to do with the tiles and coasters not being hand made as such, which I suspected might be an issue, and to do with the society's rigid view of categories. They liked the jewellery and said I could re apply next year as a jeweller if I wished, when my work had progressed. hmmmm. . . ;-) kind of back handed compliment. . .

What I find a bit irritating is that my work would happily fit alongside other craft work in a shop or gallery context, but is somehow not acceptable as 'craft' in principle. I'm not sure I will bother to re apply next year, but I will try to find some other sales outlets if I can, I just have to put the leg work in.

It's hard not to feel a bit despondent though. . .

The two girl cats, Boudicca and Cleopatra, have just reached five months of age and had their visit to the vets to be neutered. They came through the experience well, and we have tried to follow the instructions on the advice sheet the vets gave us. It says they should have complete rest. . . Yeah right, you tell them that! Two lively young cats who have been cooped up in their travel box thing for most of the day, and finally get their freedom, have other ideas. We kept them in the one room and tried to settle them down but they were intent on running around like mad things, climbing the curtains and wrestling each other. They objected very strongly to wearing their conical 'buster collars' and wrestled them off however tightly we fastened them. Luckily they had little interest in licking their scars so it was ok to leave them off.

We can't let them outside, but if they are progressing ok when the vet sees them on Monday to check how the healing is going, I'm blooming well letting them out! They will come to less harm roaming around out there than if they stay inside, going stir crazy, burning off excess energy by fighting and thundering up and down the hall like demented creatures.

Cat issues not withstanding, life goes on. Tomorrow is another day etc etc.

As an antidote to despondency, doing your accounts wouldn't be rated very highly by most people, but it has to be done, and I've been doing mine. Which has meant that I have had little time to indulge in any activity of a bead making nature in my workshop. in the last few days. But before this whole craft soc thing, I did have a good play around with some smaller beads/charms, mainly but not always involving spikes or points and largish loops, as the pics in this post will confirm. Some promising results I think. Your mileage may vary ;-)

For quite a while I have been exploring what happens to alcohol inks when diluted with rubbing alcohol and applied in layers etc. Interesting and not often what you would expect. . .


I'm going to try selling these on Facebook, as Etsy is positively glacial right now and I've been rubbish at driving traffic to my new shop on Indiemade. I'm grateful for the faves and suchlike, and for the few sales I've had, but I'm just not sure I'm getting found in Etsy search anymore. At least FB is where my potential 'audience' hangs out, and I have a presence there.
Anyway, till next time, be good and stay well,
Jon x

But back to the matter in hand. You may or may not know that I have a second Etsy shop, dealing in my own digital designs on ceramic tiles, which I sell in specially made frames, and on sets of coasters, - glass ones and wood/mdf ones. 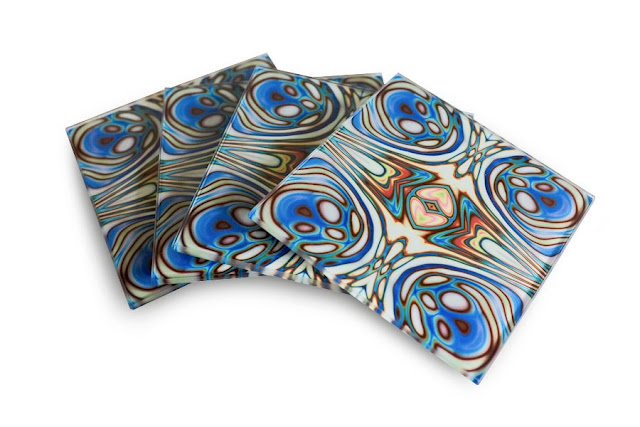 I don't spend a lot of time promoting it, for no particular reason apart from a vague disinclination to do so, but I sell some from time to time. I am quite proud of how good they look and am always getting nudged by friends and family to get them into shops etc. Well, I showed them to a local craft/home decor shop in my nearest small town and they met with approval, and they agreed to stock some. The response from the shop's customers has been good and a couple of coaster sets have sold in the last couple of weeks. I will be making some extra stock for the lead up to Christmas as they would make good Xmas prezzies I think.

On the domestic front I used some of my tiles as part of the splash back for our cooker. Visitors seem to be impressed, I am too to be honest ;-) 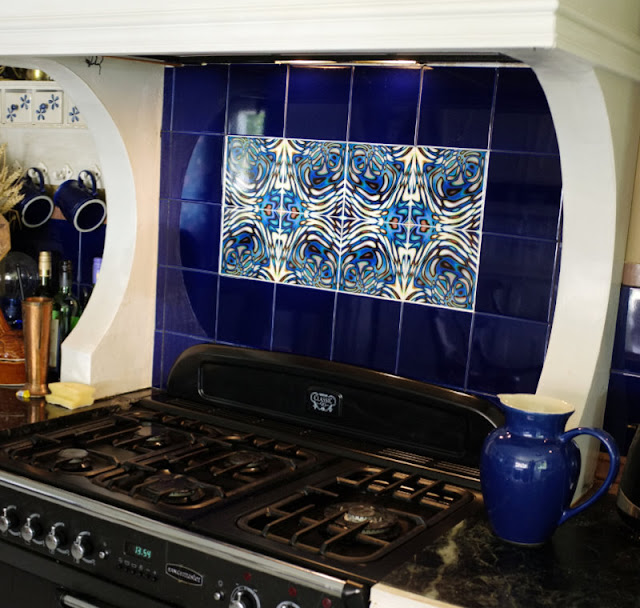 The reason I'm mentioning this aspect of my creative life is because I have applied to be a member of Suffolk Craft Society, an organisation that has exhibitions from time to time, and promotes craft activity in my general area. I have been accepted to their showcase day, where selected prospective members set up their work for discussion and approval or otherwise from members attending the AGM. My tiles and coasters will be displayed alongside my jewellery and beads as a two pronged assault on the members senses ;-)

I do have a concern that the tiles and coasters aren't really an artisanal, hand-made thing in the same way that pottery and textiles might be, and therefore get marked down. Using a computer may be looked down on also, but I have less worries about that as the application form mentioned a desire to see unique work with modern materials. I do have very good explanations for the hows and whys of what I do, so I should be able to answer any questions that get thrown my way.

Oh well, we shall see what transpires.

On the Polymer Clay front. I haven't has much time in the studio/workshop to make anything much up until a day or two ago, when I had a good old session of bead making and earring experimentation. The best bits of which will likely be part of my craft soc application showcase. I'm getting a bit more confident with wire loops and ear wires and such. Have a look at what I've been up to and see what you think. . .


I'm thinking that the spikes with loops might be more useful to jewellery makers than similar tube/through drilled ones. What do you think?

Anyway, be that as it may, I have to go. I have to work out my Suffolk Craft Soc presentation layout, choosing what beads and things to use to win hearts and minds. . . wish me luck ;-)
until next time,
see ya,
Jon x