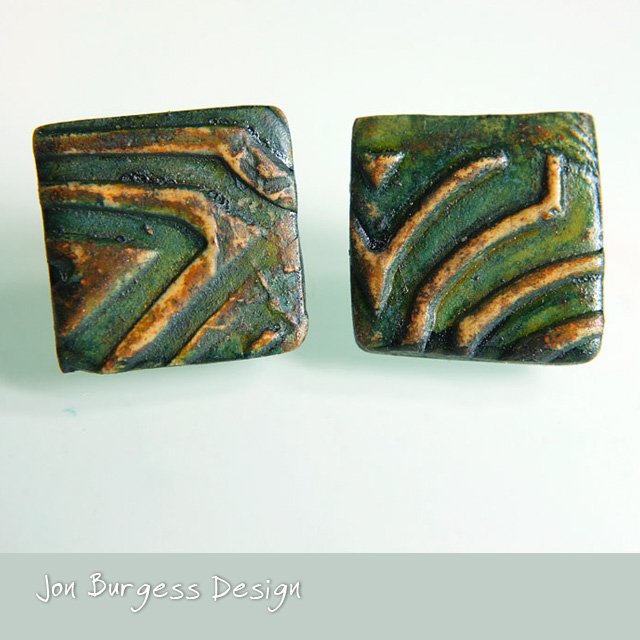 Despite what I said in my last post, about just making what I like when I feel like it and what the hell coz I'm a Nar-tist! . . . I think I have reached a certain saturation point with the little squares.

They are very cool, and have a myriad of uses, hence all the cufflinks and earrings I've been making. But I am in danger of churning them out if I am not careful, and anyway, I have now got 50 earrings listed in my shop, which is enough to be going on with I think.
I have sold some, but I have been overcompensating I reckon, so no more earrings for a bit. though, that said, if I get a cool idea I might do a U turn on that, but I shall try to avoid little squares, exquisite little things as they may be. 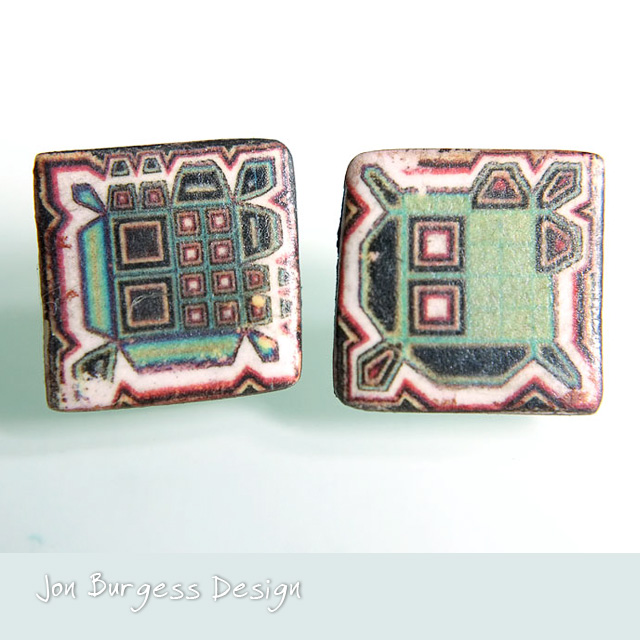 I shall turn my attention to more organic, rustic stuff. Probably. Different sorts of beads and maybe a bracelet or two as that is something I haven't tried yet. Maybe some more complex, weirder stuff if the spirit moves. Upcycle some bits and pieces perhaps. . . Not short of scope or ideas round here anyway. 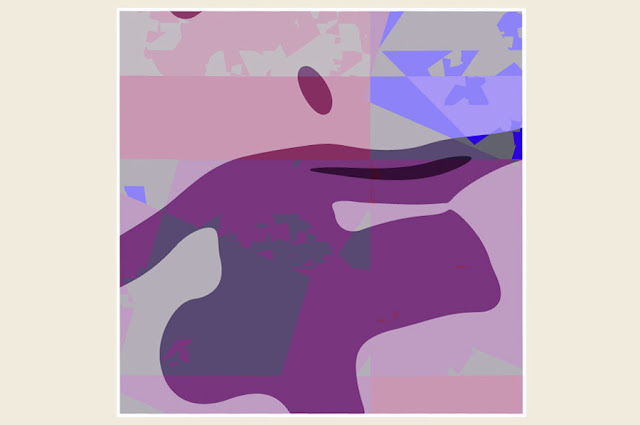 August has been pretty good sales wise, and I have even sold some prints in my other shop, which was pleasing. I need to turn my attention that way too. To my prints, and my tiles and coaster designs. Knock out some more of them, as they do sell in their own slow way. Plenty of scope to big them up a bit and stick them on pinterest etc more often. 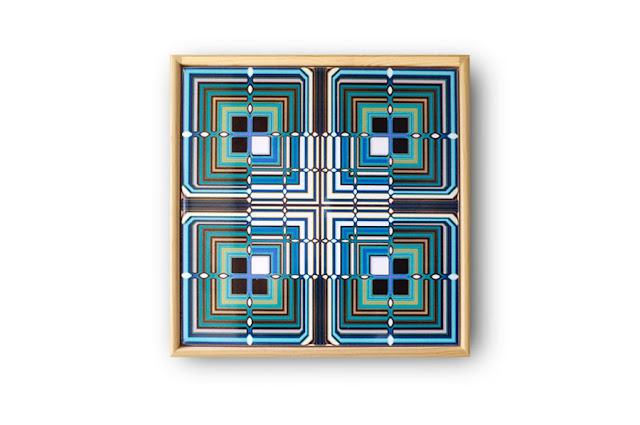 Ay well, onwards and upwards and they say.
Posted by Jon Burgess Design at 09:32 No comments:

Throw it at the wall and see what sticks. 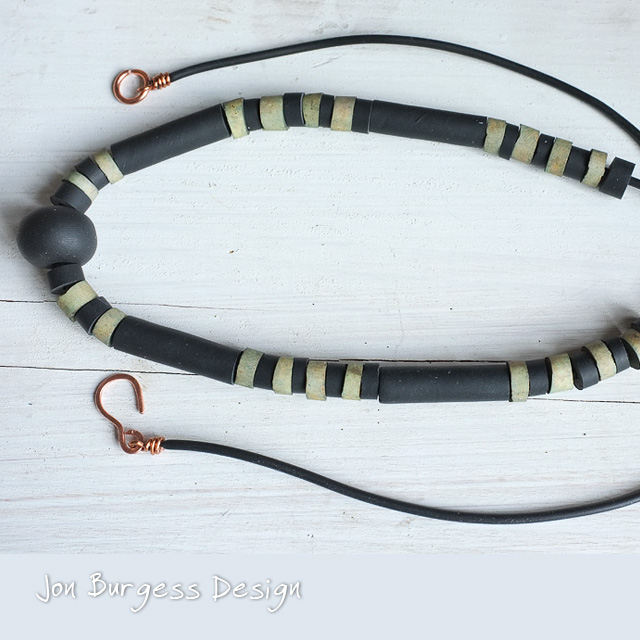 Seems to be my selling strategy at the moment. It may sound a bit random, but that's because it is.

As a non jewelry wearing non bead buyer, who makes beads and jewelry, ( I know. . . )  I can't really second guess what a potential buyer will want. Actually, I'm not sure to what extent even expert beaders and jewelry makers can second guess the market anyway. .

So I just follow my own ideas and if all goes well, put the results up for sale in my shop. As it only costs 20 cents to do that, what have I got to lose? 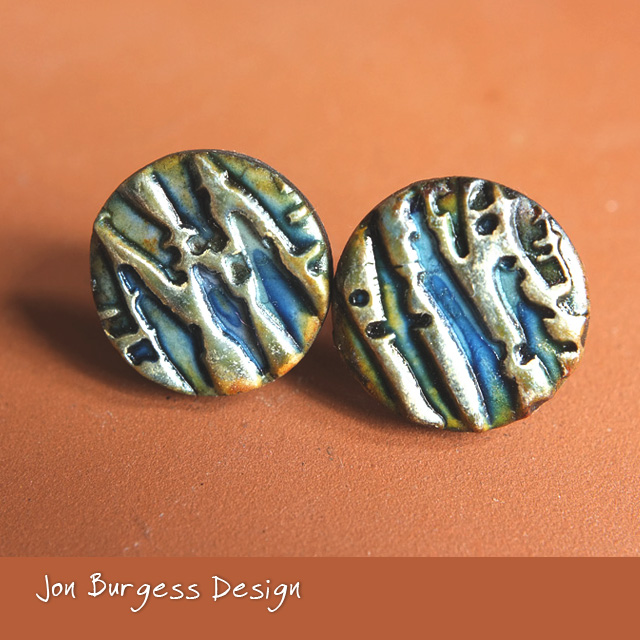 I suppose my only worry is that I will eventually have a shop full of unpopular unsold items just sloshing about looking sad. And that my time might be better spent just making loads of the things that sell.

Well, OK, I do that a bit. If disk beads are selling well, I will make some more, but I won't drop everything else.

People say that the more items you have for sale, the more choice the buyer has, which makes sense to me, but I guess there is a point at which you say 'enough is enough'. If nobody was buying cufflinks, I could keep making them until I had 200 pairs, but it would be somewhat pointless. 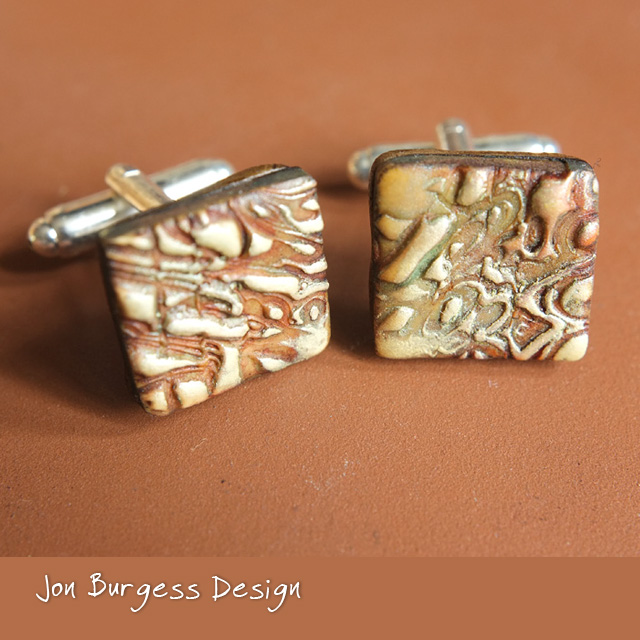 Beads are less of an issue than jewelry, bead supply shops have hundreds of listings, so I guess I'm fine with keeping on knocking them out as the urge dictates.

So I guess my selling strategy is 'Throw it at the wall and see what sticks - within reason'.
What do you think? Does that work? Have I missed some obvious disadvantage? ;-) 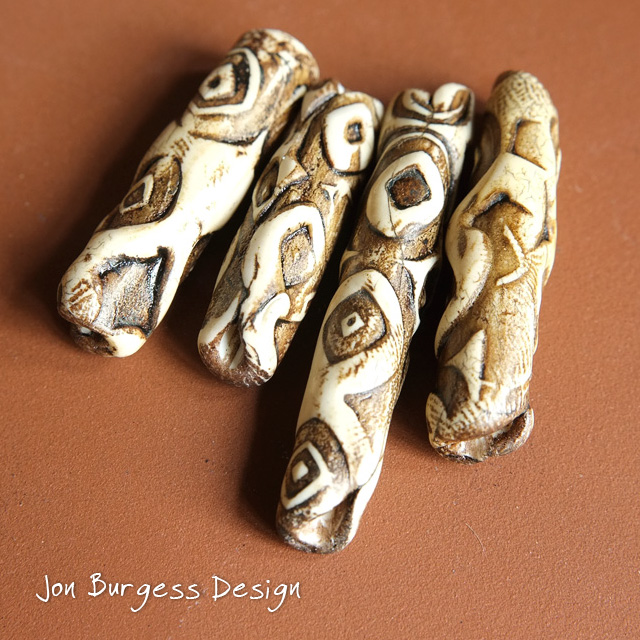 Posted by Jon Burgess Design at 09:18 No comments:

Well, I had a thought the other day. A dangerous concept I know,
"You don't want to go messing around having thoughts" I said to myself, "You never know where it might lead. No good will come of it, mark me words. ."

Yeah, well, I needn't have worried, nothing much came of it.

The thought in question came upon me when I happened to notice that I had four different brands of white polymer clay lurking in my clay storage box. This same thought led me to suppose that I could do one of those super efficient, scientific, comparison type things you see online. I could compare how well different brands of PC cope with the image transfer process, and I could intelligently but casually point out the differences etc, thus adding to the sum knowledge of mankind, and keeping the polymer clay community informed and and forearmed against the vagueries of image transferring onto whichever was the clay of their choice. . .

OK, this is what I did. I rolled out a suitable sheet of four different clays,
Kato white, Fimo Pro white, Sculpey original white, and Cernit opaque white.

Then I did my usual - like everybody else does - water and rubbing technique, image transfer thing on each of them, using similar images from the same sheet of lazer printed paper.
Below is how they turned out. The image quality was pretty much identical. One 'interesting' point was that the surface of the Fimo pro, where the image wasn't, started to turn a bit grainy, a sort of floury texture as it was eroded by rubbing. The image bit was fine. Also Fimo white is 'whiter' than the others, just a bit.
The image on the Kato white felt slightly rougher somehow, as if bits of it were very slightly raised. None of these things had any bearing on the image quality at all. Even the much maligned Sculpey original performed well. 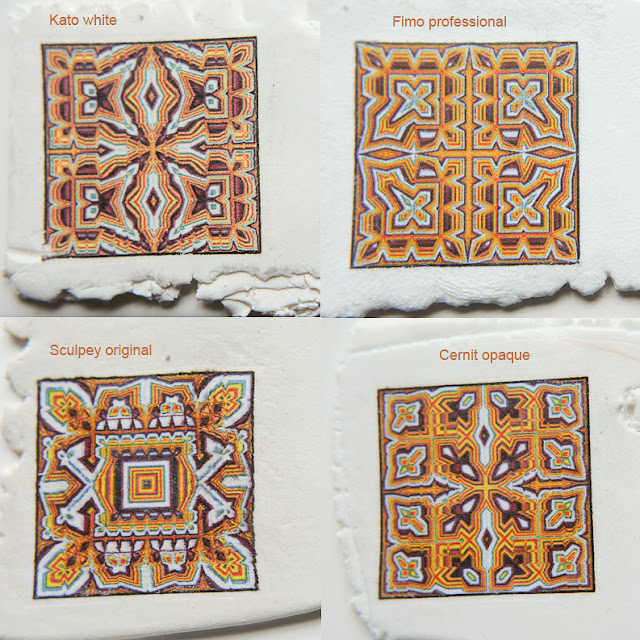 So then I baked them for about 20 or so mins at 135 degrees C. Below is how they turned out. Again, nothing frightening or unusual as far as I could see. The Sculpey orig seems to have moved slightly towards the redder end of the spectrum, but only very slightly. They all look marginally darker, but that is mainly due to the photo. 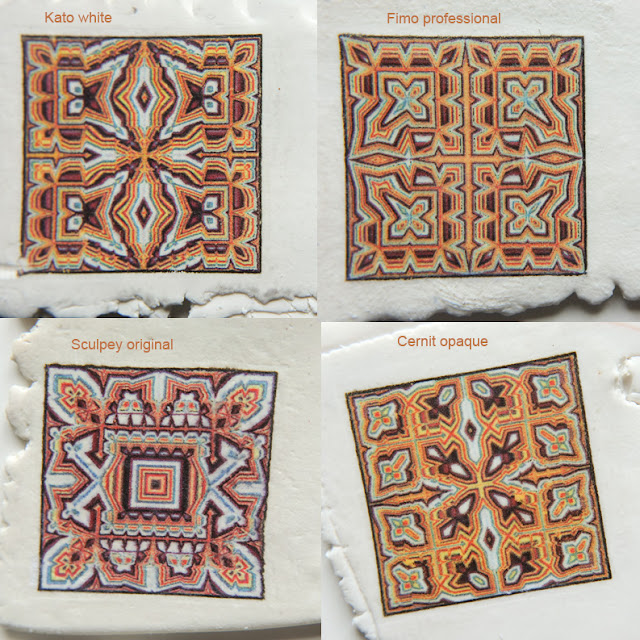 I cut the squares out, as I figured I might try to use them at least, as they didn't do anything exciting in my supposed experiment. I cut them out with scissors, which was novel, as I usually cut them out with a craft knife before baking.
Once cut out, I painted the backs and sides with 'Ginger' alcohol ink and treated the whole thing with Renaissance Wax and buffed them up a bit.
Then I decided that they were too 'bendy', meaning they hadn't been baked enough, so thinking 'What the hell." I chucked them back in the Halogen oven for another 20 mins.
Maybe a bit long, as they all bent up a bit as the image side seemingly shrank a touch. They were all suitably stiff and hard though. The odd one out was the Sculpey Original, it went a pinky purple! I 'think' it was the renaissance wax melting and dissolving the ink or toner and diffusing it across the surface. Very odd. (Ren wax and toner don't get on.) Might be something to play with in future and see what cool effects could be got. . . hmmmm. .
The Kato came out the hardest and stiffest, with the Fimo and Cernit being a bit bendy but v tough. The Sculpey was pretty strong, but would probably snap if you really bent it hard. But then, why would you do that? 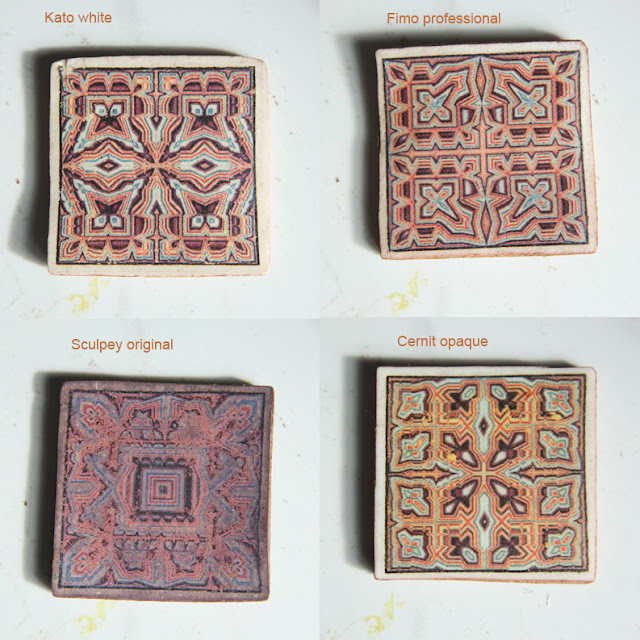 So, my expert conclusion about which brand of Poly clay to use for image transfer is? . .
That it doesn't really matter. Sculpey Original would need to be a touch thicker or have a thin backing sheet made of one of the tougher brands to be useful in more demanding applications, but it is perfectly ok, as long as long as you don't rebake for too long after using ren wax on it. An unlikely circumstance, unless you are me. . .
Oh well. . . . Mankind's knowledge will just have to wait for another day for my input OK?
Jon x
Posted by Jon Burgess Design at 12:44 No comments: