Plumbing, Strumming, and a new Photography Set Up, which doesn't rhyme. . .

Well, it's been a while. Mainly because I haven't had a lot of blog worthy creative work to share owing to my time being tied up with other things. Constructively tied up with other things, but tied up nonetheless. . .
I have been refitting our bathroom, which is a pretty major undertaking for me. Not outside my capabilities but pushing the limits of my know how. Anyway, all major elements have been fitted (not without some tricky moments and stressful stuff, as is the way with these kind of projects. .) and seem to work as they should, so I can relax a bit more and get back to my creative work. Eventually.


I did take an hour or two to follow up something that had been nagging at me for a while. I have had issues with the white point setting on my camera. Whatever I do, I find that I need to spent too much unnecessary time adjusting colour in Photoshop (or rather, Affinity Photo, which is what I now use) to get the colours to match the original bead/object being photographed.

So I decided to make a photo box thing. You know, a big cardboard box with the sides cut out and white paper taped in instead. There are various youtube vids on how to make/use one. You can buy them on ebay as well.
I knocked a crude version up in about half an hour. It hasn't completely solved my issues, but it has made a big difference to the consistency of my photos. I can use the same levels setting on each pic and hardly ever have to reach for the white balance adjustment layer, or any of the many other colour correction options, which is great. 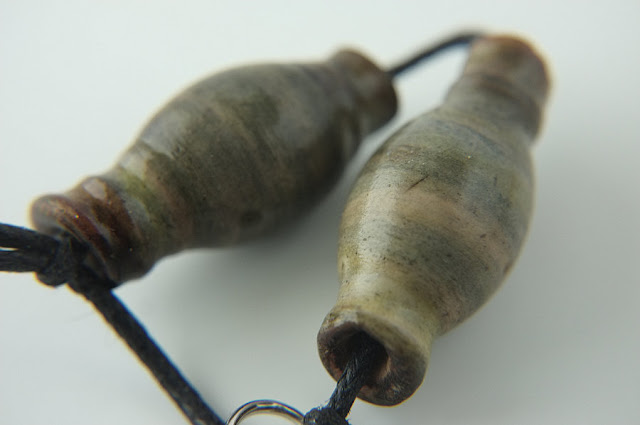 I have decided to rephotograph all my products using this set up. Which will be a time consuming process, but worthwhile I think. Or a big waste of time. . . whatever, I have decided to do it anyway.


The other thing that has added to my general hiatus from the creative process is that I had a couple of disappointingly unsuccessful selling sessions on Facebook, and realised that, unlike a shop, where something is on view and on sale until it sells, on Facebook, like an auction site, if something doesn't sell in the three days you have allotted, then it has to be removed. In which case it disappears from public view.
I found it kind of dispiriting. Not a very logical reaction I know, but I don't think I had quite thought it all through.


I don't think it is appropriate to list the same items more than once, (or maybe listing once again in a different group is OK. . ) on FB, so I will have to create listings on Etsy for them, until I can work out what my website strategy will be.

For the reasons detailed above my recent social media presence has been pretty minimal of late, which doesn't help my visibility much. I have started putting stuff up on flickr again though, so that's something.

With a bit of luck I will be back in the workshop/studio next week at some point, so I will have some new stuff to share soon. meanwhile here are a couple of reasonably recent things you won't have seen on FB or elsewhere.


As for the reference to strumming in the title, it isn't entirely accurate as you don't strum a bass guitar, or at least I hope not, though is technically possible and I dare say some players have ventured there at some time or other. . .

I had been hoping to run across some other musicians in my area ever since we moved in a year and a quarter ago, and as I think I mentioned a few posts ago, I ventured out to a 'jam night' in a pub in the next village only to find that the organiser and his wife were the only relevant people there, and she didn't play anyway. Which left me and him, and I didn't bring my amp with me as I hadn't quite understood the low key nature of the set up ;-) so we didn't play anything.
But on the due date the next month I rolled up again, with my amp in tow, and me and the him sat in a corner a banged out as many songs as we could remember the chords for. More of a sing song than a jam as such, and a lot of fun. It went on till about two a.m. The other pub goers enjoyed it too.
So we are going to do a new year's party there. Just him and me playing, unless a drummer materialises. It's great to be playing music again after about three years of not being in a band of any kind ;-)

Stop press! We had Snow! Not snow that anyone from more northern climes would get excited about, but a bit of a novelty round here. We had at least half an inch! ;-) . . . So I wandered round the garden and took some photographs. Enjoy. . . and see you next time, hopefully with some new stuff to show you.
Jon x