Pruning, which has no relation to Prunes, Swords, Mixing Wires and Getting Back into it All 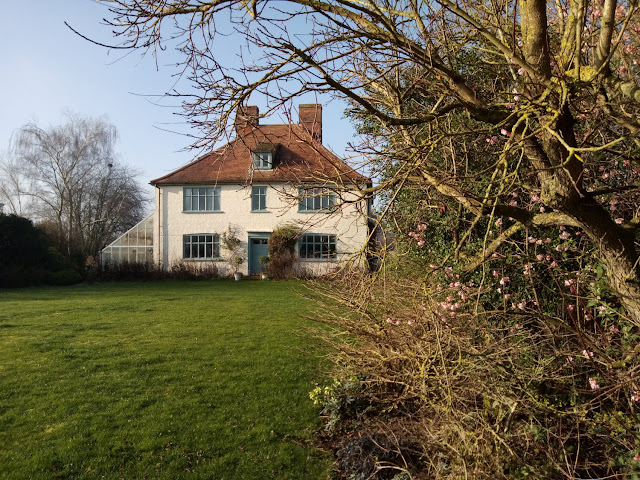 Well, the weather got a bit wintery for a change! In a good way, it's been dismally dull and wet for weeks round here. Steady light rain and the kind of dull light that makes you feel like you never actually woke up fully, so you mooch around, squelching across the mud and moss that may revert to something like a lawn one day if it ever stops raining, grumbling, mumbling and tripping over the chickens, feeling like your battery failed to recharge properly and you left your 'oomph' in your other trousers. .

But a few days ago it was crisp and bright. Cold, (comparatively of course - this is the south eastern bit of the UK after all) but we had bright sunshine for two whole days, which meant it was actually pleasant to be outside. This was convenient as there was work to be done in the garden.

The apple trees needed pruning and as it was the right time of year for such activity I got the ladder out and set to work. I might have been a bit too enthusiastic as when I looked up a Youtube vid or two  after the event, (I know!) it seems I cut some of the new growth back a bit too much. Still, I got rid of the millions of spindly vertical bits called 'watershoots', that produce neither fruit nor blossom, so if we get fewer apples this year than we potentially might it's no great loss as we usually get far too many anyway. . .

It's the cooking apple tree up next, Bramleys, lovely great big buggers they are. We get shedloads of them, maybe I should start up an apple pie factory or something.

Still I'm not really complaining, I am only doing a good impression of somebody complaining, I mean, we have an actual (small) orchard FFS! Not something I imagined I would be lucky enough to own years ago ;-) So I feel suitably blessed.


Anyway, pruning aside, I have been back in my workshop making stuff. I think people, including me in my capacity as a person, are a bit tired of the chunky rectangular image transfer stuff I've been making lately, so I will leave that alone for a while I think.
I am busy making some spike related things. Spikes with a slight difference, as I am using upcycled wire instead of copper for the bails and loops. Something I have done before but not quite in this way. I have been making Swords. . . Cool huh? 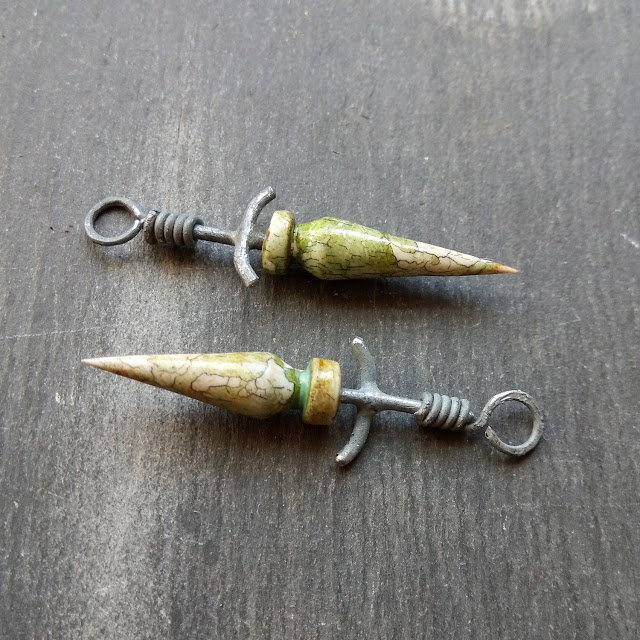 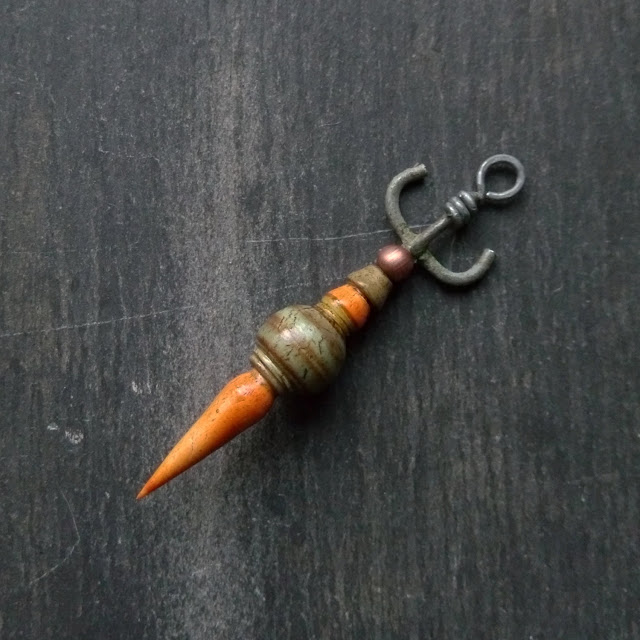 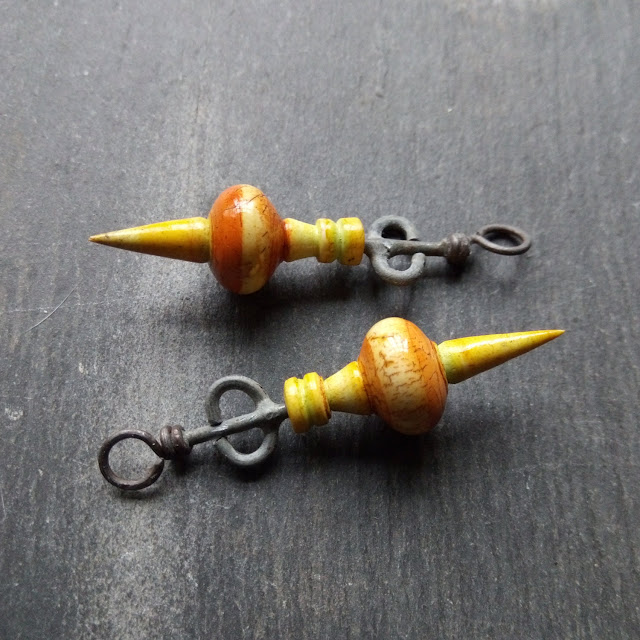 Oh yeah, before I knocked the image trans stuff on the head temporarily I messed around with using thin copper wire wrapped round some of the upcycled wire I like to use as bails etc. 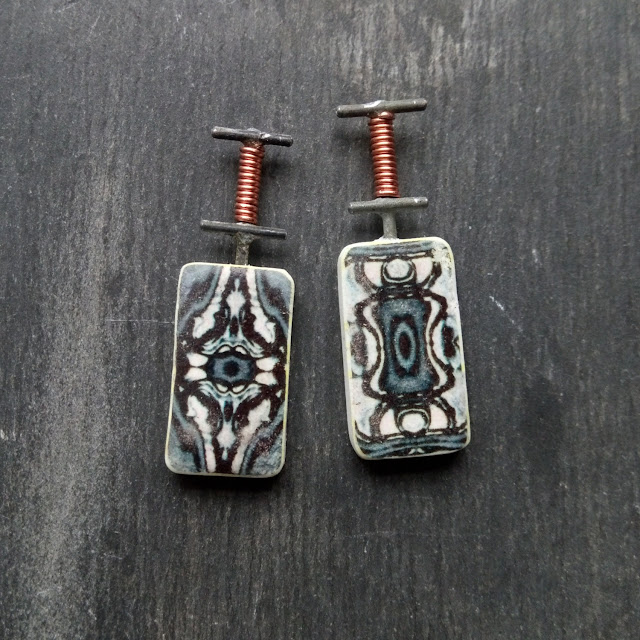 I liked the effect, so I have integrated it into the Sword thing. . . 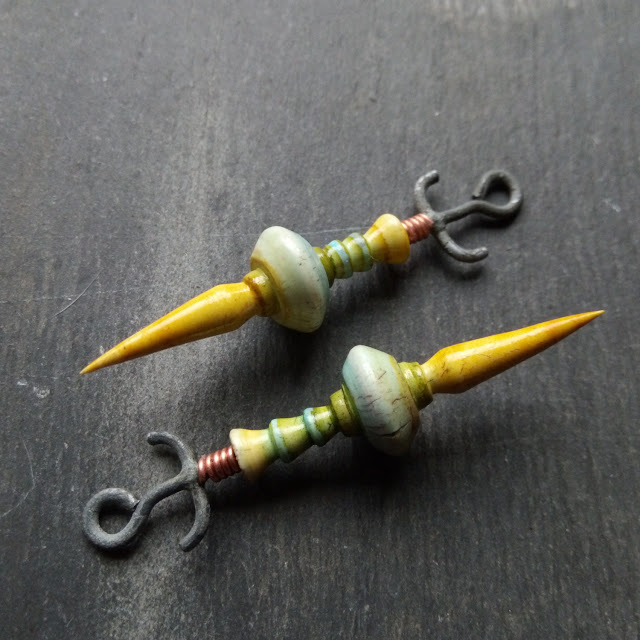 Selling wise, things have been a bit slow but it's all going OK, with a few things actually selling on Etsy believe it or not. Maybe I have ceased to be invisible there for a brief time, who knows?
Anyway, onwards and upwards, or at least not backwards and downwards, the climate is taking that journey on it seems. . . ;-(
Until next time, whenever that might turn out to be,
be well,
cheers
Jon x
Posted by Jon Burgess Design at 04:20 No comments: