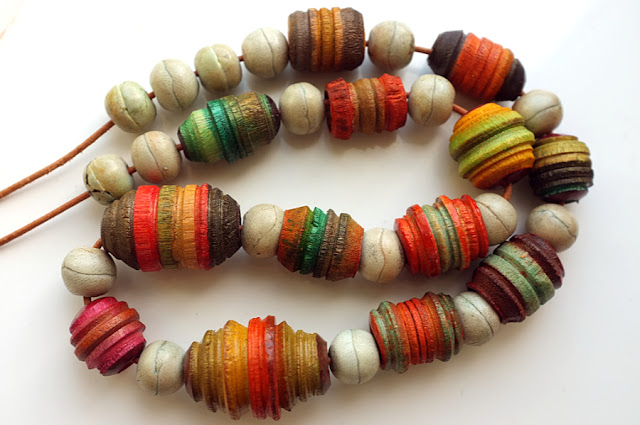 Blog Neglect Hits new Heights, Ideas are Everywhere, Including the Strange Case of The Mirrors and The Guinea Fowl,

May it be full of love, light and creativity and all that stuff. . .

I have been pretty busy with all sorts of things over the last month or two, and as a consequence, not really in the mind set to write blog posts. When you are busy, some things have to be put aside, and as blog posts are a kind of ephemeral extra, they tend to be victim number one.

Victim number two, though by no means an ephemeral extra, has been bead making. I took the opportunity to take a break, as cramming in the the odd hour or two in my workshop, between serious DIY and catering for Xmas guests is not really useful or satisfying.
A break meant that I could take stock and do the New Year thing of taking a step back and looking at where I am and what direction I might take next. This break also meant sacrificing a couple of week's potential earnings, but you can't make the proverbial omelette without breaking eggs. . . Well, you could try, but it wouldn't be any entirely sane person's idea of an omelette really. . .


So here I am, somewhat shamefacedly blogging again. Thank you for your patience ;-)

As you may have noticed over the months, my work often goes off on tangents, triggered by something I just discovered by accident, or just came across in the course of day to day life. Sometimes a process, sometimes an object or type of material. I have developed an instinct for noticing potentially useful happy accidents, and due to the positive response I get, the confidence to pursue them further.


So when I accidentally broke the mirror we had put out in the garden for the Guinea Fowl it triggered an idea. . .
Wait a minute, you put out a what?
It's a bit of a long story, but I will be as concise as I can.

We have two guinea fowl which potter about our large garden and the surrounding area, including neighbour's gardens. Everyone seems OK with this as they are harmless and quite amusing to watch if not to listen to (!).

Everyone that is except our immediate neighbour who was a touch upset by their habit of pecking at his patio doors and leaving a bit of a mess on his doorstep from time to time. Was there anything we could do about this, he wondered.

Well, other than having a quiet word with them, which wasn't an entirely serious idea, or getting rid of them, which was out of the question, we couldn't really come up with anything. So we did a bit of research.

Guinea Fowl are social creatures and live in quite large flocks in the wild, so we wondered if the reason they were hanging out by, and pecking at the windows was because seeing their reflections made them think they were amongst other Guineas.
So as an experiment we put a couple of spare mirrors we happened to have left over from our house move, out in the garden.
This did seem to get their attention, and they did spend time in front of the mirrors so we hoped for the best.
The neighbour hasn't complained since, but he has found a new partner recently, which might have mellowed him out a bit ;-)
(he looks after two boys in their early teens on his own, which must be a bit stressful)

So crossing fingers, that has amicably solved that little issue.


Now, to the happy accident part.

One of the mirrors was leant against our household compost bin. This bin is rather full and the seams are opening up somewhat. It needs emptying but I figured a well aimed kick might help close it up a bit. Only it wasn't a well aimed kick, it caught the mirror and smashed it to bits. (it was cracked already to be fair, so I didn't claim my 13 years bad luck). I was on my way to the waste bin with said bits when I had a 'Hmmm. . I wonder.  ." moment and headed for my workshop instead. 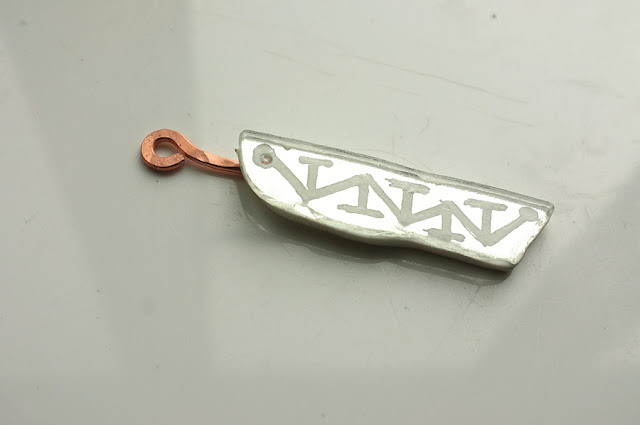 A mirror is basically a sheet of glass with silver nitrate on the back, so, I figured, that backing could be scraped off in such a way as to make interesting patterns. I carefully broke off some small bits of mirror and reached for the Dremel and the grinding bits.
It worked quite well, (I quickly realised I should wear a face mask as inhaling fine glass dust is not such a great idea.) so I made a few drops/charms using this technique. Extending the process to involve polymer clay backing, both coloured and non coloured.


So there you have it, how Guinea Fowl related disruption can lead to creative innovation of a modest kind ;-)
Which supports my long held belief that the wonder of life has a lot to do with it's random and absurd moments. . .
Until next time, which will not involve a wait as long as the last time,
Cheerio
Jon x 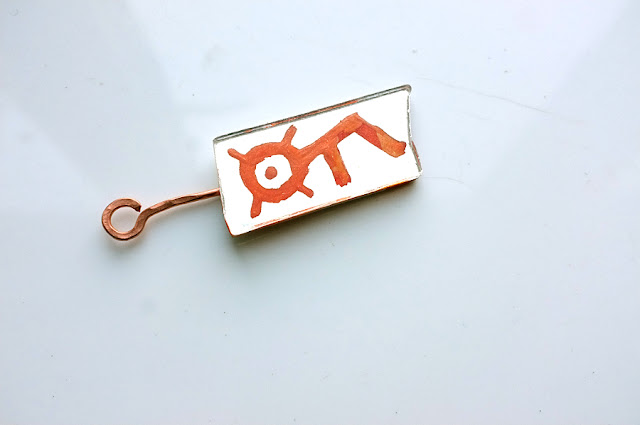