The thing about round image trans beads, the way I do them anyway, is that what seems to be the logical way to align the image doesn't show the image to its best advantage. See Image 1, above.
I cut out two round, symmetrical pattern, image transfer circles and wrapped them round my bead core with the centre of each circle being over the stringing hole. Which looked fine until I actually stuck them on a string, at which point I found that the main focus of the pattern was hidden in the shadowy space between beads. The most visible part was the seam and the edge of the pattern, which was not ideal. It looked nice, but felt unsatisfactory. (Note- with an abstract, non symmetrical image, this issue doesn't arise, but I want to use my groovy patterns.)


So I tried another way. Image 2. Aligning the images facing horizontally, so that the edges/seam cross the stringing hole, and the full pattern is visible on both 'sides' of the bead, facing the viewer as it were. It still gives you the seam on the other two 'sides' though. This works nicely, but depends on the direction the bead is facing. If the seam is facing the viewer things are less satisfactory.
You also can have difficulty locating the stringing hole in the core bead, unlike the previous method, where it is easy to find, at the centre of the pattern.

Another way I tried, - Image 3 - hoping to sidestep the previous issue of having the seam presenting when I didn't want it to, was to wrap a larger pattern round one 'side' of the bead, (as far as that is possible, what with the overlaps and crinkles you might get once you get past the 'waist ' of the bead), and fill in the remainder with spare bits of pattern etc.

OK, that worked up to a point, but the non pattern part still looked messy. Image 4. Probably, with a more planned approach it could look good, but I'm not convinced by it at present.

The other issue I had with these particular beads was my own fault. I wrapped some blank clay round a smaller bead core to make the core bigger, so I could use a bigger image. What I should have done was to bake the wrapped core before adding the image trans, but I didn't, so as the unbaked clay I had wrapped round the core was a bit squishy, things got a bit misshapen in the image wrapping and hole piercing process. . .

Well, live and learn. . And stop being so impatient!

I'm still not sure what my best option is. I might try wrapping a wide strip of pattern round the 'waist' of the bead. . . My best bet is probably to design some patterns with the interest being round the edges rather than the middle, then option 1 would work better. . . I dunno. But I will definitely bake the core next time. . ;-)
Jon x
Posted by Jon Burgess Design at 13:44 6 comments:

There were some small bits of image transferred polymer clay left over from my Image Transfer Tube bead TUTORIAL. I don't like these things going to waste, so when I realised that they were just big enough for my 8mm square cutter, I cut some squares out of them. So, now what? What do I do with these little squares? . .

Well, I had seen small stud earrings on various people's sites and in their shops and often thought I should have a go at making some. Well, this was my opportunity. See below. I think they turned out OK. I was worried that they might be a bit too thick, but the consensus amongst good people I consulted was that they were fine. So I listed them in my ETSY SHOP.

I admit that I felt a twinge of guilt about charging even half decent money for such teeny tiny things, but I've been around long enough to know that it's just 'artist's insecurity', (an old and familiar enemy) rearing its pathetic head, so I tried to ignore it and hope it would take the hint and return it's head to its previous, un-reared position and not bother me again. I mean, they're not that blooming expensive.

As you can see from the top pic in this post, I also made some dangle type earrings out of the same leftovers. I'm trying out different options you see.

Over the past several months I have been keeping half an eye on how other makers I admire go about configuring earrings. Not that I haven't made and sold quite a few sets of my own in the past couple of years, you understand, but I'm all too aware that they have tended to be the obvious, 'dangle one of my beads from an ear wire' style things. Which, though the results can look good, is not exactly stretching me as an artist or teaching me anything. I need to be more adventurous.


Though I am very concerned with being 'original' - almost pathologically so ;-) Just now I feel the need to follow in other's footsteps for a bit, at least until I feel confident enough to branch out on my own.
Ok, that doesn't sound much like 'being adventurous', but it gets me out of my comfort zone, and anyway, you have to walk before you can run, innit?

I have noticed and noted the tendency in most makers to have a bead of some sort between the ear wire and the main charm/drop, (observant eh? sharp as tack, me. .) so using bits I had lying around, I knocked up the earrings below, and the ones in the top pic as mentioned before. . I even did that twisty wire loop at each side of the bead thing. . . Not all that exciting, but they do look, to my unpracticed eye, quite 'wearable'. Or maybe just a bit 'like what other people do' and more like 'proper jewellery' ;-) whatever that means. I dunno.

Although, to be fair to myself I have tried to break out of my 'single bead on an ear wire' habits recently, (see below). If you remember, I did blog about these old nails and spare beads earrings I made before Christmas, but that was me following a whim rather than trying to work things out.

On a different note, I hope you dig the background props in these pics. It's a wood and wire box that I have had knocking around for years. I think it had some kind 'gift' in it, like a bottle of liqueur or some such originally, but anyway, I found that its just the thing to display earrings on when I want to photograph them. I stuck a pattern print I had recently made for a completely different purpose, and which happened to be on my desk, in the back of the box, set the camera to f4, to put the background out of focus and took some pics. I think it looks good. Apart from the cobwebs that is. I'll attend to them later.
A new look for 2017 eh?
Anyway, that's enough blather for one evening. See you next time.
Jon x

Start as you mean to go on. . . Ho yes! - featuring My First Tutorial 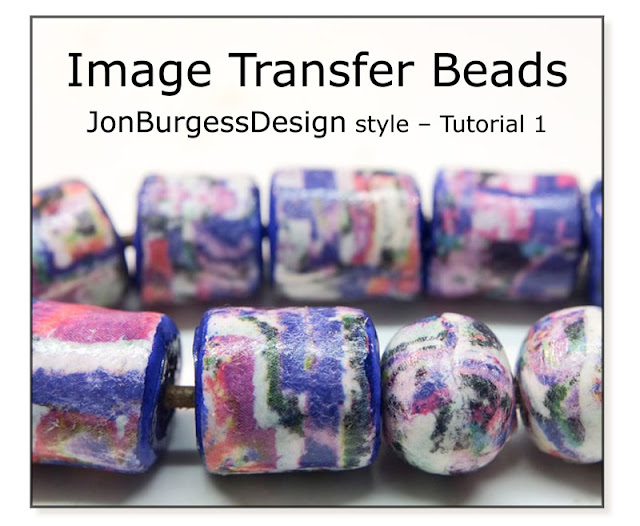 Well It's 2017. Let's hope it's not as turbulent as 2016 was. For me I mean, though I hope the World calms down a bit too. Lots of disruption and not altogether welcome change went on in all sorts of places in the last twelve months, causing anxiety, bewilderment and high emotion. . . Interesting times, as they say.

For us, the turbulence was caused by a stressful, but ultimately rewarding house move, as regular readers of this sporadic blog would have gathered. We've no intention of going through that palaver again so we've agreed that the only way we are leaving this place is in a box. Not the same one of course, two boxes would be required, but you get me drift.


Anyway, I've been mentioning in passing how, at some unspecified point in the future I would probably be trying to make a tutorial to do with image transfer and it's use in my bead making, well, guess what? Listening to my inner Yoda ("Do or not do, there is no try") I went ahead and made one.

The pics link to it, and so does this TUTORIAL text link.

It was an interesting project, breaking down a process into a logical and repeatable sequence, then documenting that sequence, step by step, clearly enough for a clayer of any ability to follow and end up with a pleasing result. Having carefully followed that procedure, I hope I succeeded in that aim.
If not, it's all Ginger Davis Allman's fault! ;-)
Just joking. . . Obviously. . .

I approached Ginger for an opinion of my first draft, and she was very helpful, pointing out things that might confuse US readers, calling me out on bits that weren't as clear as they might be and helping with copyright stuff and disclaimers etc. All vital and extremely useful stuff, so many thanks Ginger!

I chose a simple technique for making tube and round image transfer beads in my usual rustic style, including some tips on successfully navigating the time honoured 'water and rubbing' image transfer process and avoiding the dreaded 'stickiness' problem which can occur.


It's up in my Etsy shop should you feel the irresistible urge to buy it.

It feels good to have started 2017 with something new, for me at any rate. Something to coax me out of my comfort zone.

Well, start as you mean to go on. . . I hereby give notice that I fully intend to keep upping my game in various ways in the the weeks and months to come, and to thoroughly enjoy the process. Yay!


Until next time,
Happy New Year!

ps - And I still haven't told you about the jackdaw in the other chimney. . . Ah well, next time.
Posted by Jon Burgess Design at 08:08 2 comments: