Upcycling and Going with Instinct etc 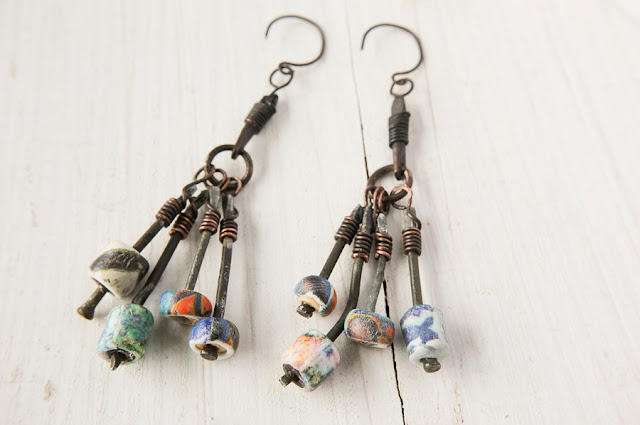 I haven't has much beading time this last week or two. DIY stuff for the house has temporarily taken over. But if I hadn't been doing house related stuff I wouldn't have pulled some old, patinated and bent nails out of an old victorian bed frame that we got at a local auction, and which I was trying to construct, (without any instructions. . . It all made sense in the end, and hasn't collapsed yet so I think I got it right. IKEA it ain't).

Anyway, said old bent nails struck a bit of a chord with me. I just liked the way they looked so I kept them aside. You get an instinct for stuff you might be able to use. Not a strong instinct, but if you are aware enough, it kind of nudges you from time to time.

I was duly nudged, so next time I was in my workshop I tried threading some left over, or mis-sized beads that I had on my desk amongst the detritus and creative debris, onto the nails. They looked quite nice, so I decided to try to make something with them.

I flattened and widened the top of each nail and then wire wrapped it with a fair few turns of anodised copper wire leading up to a loop at the top, which I flattened a little bit too.
They looked good, so I decided that they would look even better as earring charms or drops or whatever you call them.

I cut a small bit of thick copper wire, flattened each end with my jewellery hammer and drilled a hole in the widest end. I had to use my power drill, which was a bit cumbersome for fine work, but my dremel thing wouldn't have had the required oomph to do the job.
The hole was conveniently the right size for the large copper jump rings I had lurking in my findings box, so I threaded one through the hole. Oh yeah, after I had wire wrapped the other end of the thick copper wire that is. Then I threaded the nail charms onto it, grabbed a couple of ear wires and had a look at what I had got. 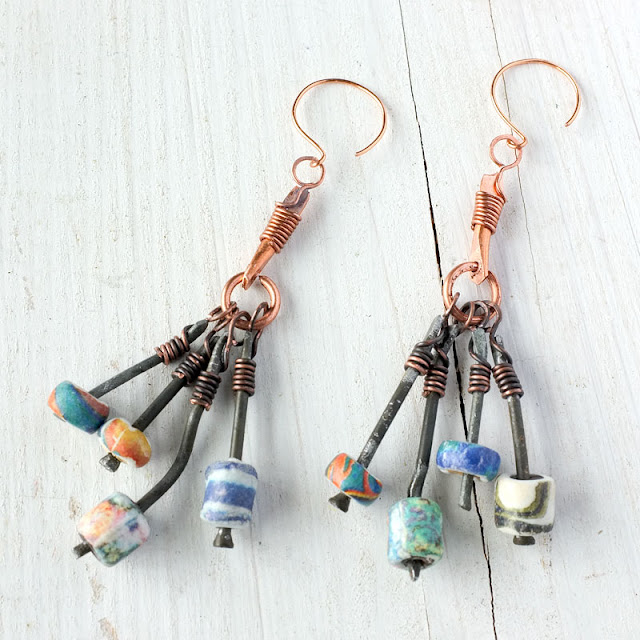 I liked them, but was advised by a few knowledgable people to oxidise the copper ring and wire to match the nails and their wire, so I dug out some Liver Of Sulphur that I had bought a year ago and never used.
It worked very quickly and didn't half smell eggy, as it would of course. I brushed a small amount of Renaissance Wax onto the newly oxidised bits as that is supposed to stop it rubbing off I believe. The result is in the top pic in this post.

I like it when I can just follow a seemingly obscure train of creative thought to some kind of conclusion. Following my fascination you could call it. . .
Jon x

Posted by Jon Burgess Design at 05:11