Well, not wishing to start off what is supposed to be a polymer clay bead type blog with pictures of kittens, I will start off with a pic of my newest discovery/experiment ;-)

I realised that I can use my 'turned effect' technique on image transfer beads. Interestingly, this confirms to anyone wondering what I am doing, that, even though the results may look like it, I am not using a lathe. (though I like the idea of trying one out. . .)

So, I hear you cry, what are you doing? Good question. It's hardly rocket science but in case you hadn't worked it out, what I am doing is basically rolling unbaked polymer clay between various things. All sorts of things but mainly everyday/hardware store/DIYleftover type things. For some deep seated and so far unexplored reason I love using things for purposes for which they were never intended. . . Especially when the results are really cool. And as you know I am always ready to follow the fascination. . .
The above pic is a record of my first experiments. Nothing that useful in themselves, but the possibilities are certainly there. I was quite pleased that the process doesn't degrade the image as much as I thought it might. And anyway, even if it does, it's part of the effect as far as I am concerned.
So now you know.

Anyway, enough polymer clay rubbish. The main story in my life this week has been KITTENS! 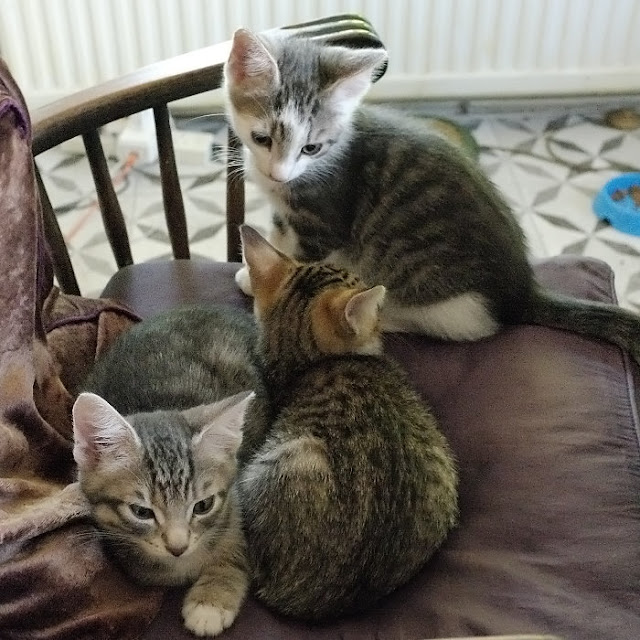 Our neighbour is a fosterer for the local branch of a cat rescue charity, and some time ago I had mentioned the possibility that we might want to adopt a kitten, or maybe, just maybe, two. . .
Well, last week she came round to tell us that three little silver tabby and white kittens were ready for rehoming. The catch was that they don't let single kittens from a litter go, we would have to take two. . . We discussed this, and agreed, but very firmly drew the line at three. No way. Out of the question we said. . .

Say hello to our three newly adopted kittens! Our firm line was obliterated the millisecond we saw them. I mean, how could we leave one all on it's own? Hard as nails, us. . . sigh. . .

The one at the back is the boy, the other two are the girls, and very sweet they are too ;-)

OK enough about kittens, this is a polymer clay blog after all, below are a selection of rolled/turned effect beads I made last week. You may have seen them before on FB or IG but they are worth another look. They are in my SHOP, along with some more recent stuff and just about all my Etsy shop's stuff which I have transferred but still not finished rejigging the titles etc.
I changed the theme to a more mobile friendly one, which was a pain, but had to be done as when I checked the last one out on my iPad the writing was so small as to be illegible. Not good. It should look much better now.

Further to my image transfer rolled/turned beads at the top of this post, I made a few further experiments and the beads below were the result. Kind of cool without being obviously image trans. Hmmmm. . .

I couldn't possibly go without sharing another pic of the kittens, or at least two of them, showing how deeply traumatised they were by the adoption process ;-) They are such happy, socialised, well adjusted little beasties. . . I wish they wouldn't insist on walking over the trackpad on my laptop though. One managed to erase three lines of text, and another one just launched iTunes. . . !

See you next time,
Jon x 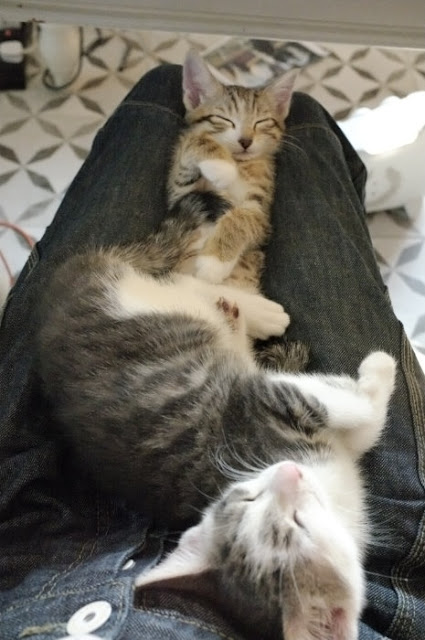 Posted by Jon Burgess Design at 07:47