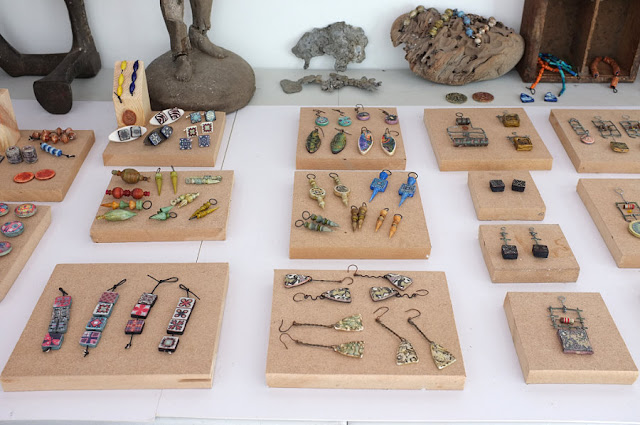 Well, it's been a hectic few weeks. . . The Norfolk Open Studios weekend we had signed up for all those months ago finally came round, and it was pretty full on getting ready for it. I had to sift through, and choose various designs to print, work out which designs to make into tiles, make the tiles, get some not too expensive frames for the prints, work out which pieces of jewellery and which beads to put on display, how to display them and how the various strands of my work would fit together. . . Interesting but just a bit too much like flippin' hard work. (And I had a gig on the Sunday that I had to find time to rehearse for. . . It went well, apart from the rain, it being an outside event - we huddled under a gazebo thing until it stopped after about half an hour, but It's all left me feeling somewhat wiped out)

I also felt I needed to write a kind of artists statement explaining a bit about the intention behind my work and how it came to be created etc.

So what I will do for this blog post is show you some pics of the final display and regurgitate the artists statement for your delight. . . ;-) Actually it does quite succinctly pin down a few things, I think. You may find it interesting. . .

My work and practice involves making unique, digitally constructed images (derived from my explorations into the mathematics of pattern – in nature and in decorative and other arts) into physical objects by transferring said images onto paper (as prints), and onto tiles and other surfaces.
My tiles lie, in category, between prints and ceramics, being essentially prints onto a ceramic surface. Framing them serves to emphasise their function as art objects.
In my work, unlike most artisan print processes, the actual production of the physical object is not where much of the skill and expertise lies. In my case that skill and expertise is largely to be found in the mastery of the software I use to create the images, and the vision to see that it could be used for such a purpose in the first place, (a purpose it was never intended to be used for).
I have a deep interest in the so called ‘mathematics of nature’ and how computer software can be used to impersonate natural patterns and surfaces by using that mathematics. Leading on from that, I have found in my explorations that patterns can be produced (especially when symmetrically reflected) that resemble patterns produced by entirely human means. I find echoes of African art, Art Nouveau and Deco etc. This leads me to speculate on the reasons the human brain and the human mind find certain shapes particularly pleasing. It could be that these fractal forms echo the fractal nature of the brain and it’s workings, that there are some forms that are somehow universal. . . They also look beautiful, both old and modern at the same time.
Which is also a feature of

My Bead and Jewellery Work.

My chosen medium is polymer clay, technically a modern, plastic modelling medium with many clay like properties. It is malleable until baked (at domestic oven temperatures), whereupon it becomes hard and tough. It can be painted, sculpted, glued and distressed in various ways. It is also cheap and no specialist equipment is required which makes it less intimidating to experiment with.
It is an interesting material in that it has little identity of it’s own, possibly due to it’s newness as a medium. This lack of clear identity, its transparency if you like, means it is can be made to impersonate other materials, but produce forms that those materials might not be able to.
I discovered that many artists use polymer clay to make beads, which led me to explore beads as cultural phenomena and as art objects in their own right. And to realise how very ancient beads are in the history of human creative endeavor. Personal adornment has a long history. This was all new to me, and I found it fascinating.
My work involves utilising textures and images, transferred or impressed into polymer clay, to make unique and unusual beads and jewellery. Exploration, experimentation and following the fascination are the guiding principles of my practice. I use many techniques in my work, such as image transfer, texture making, faux ceramic, crackle glaze effect, turned effect, and directly distressing the surface. I have also developed surface treatments to make my beads seem to be ancient, although actually being entirely modern. An apparent contradiction I also find fascinating.

So the first weekend was a bit slow as far as sales went, but a couple of couples of old friends dropped by, having seen the brochure thingy and not yet having seen our new home. That was very nice.

I might juuuust break even if I sell couple more things, but really, it does feel like the work and money spent wasn't quite worth the return. Still, it maybe puts us on the map, so to speak, and could lead to future sales and suchlike. Not sure we will do it again though.

Who's eating cake? well, apart from us that is. The ducklings are! The five ducklings that hatched by our pond about three weeks ago were down to four pretty quickly, but are still four, which is great, as it means they are probably going to make it. Their mum is very protective and has the cats properly intimidated. We seem to have an endless supply of stale cake lurking in the bread bin, so these lucky ducklings have been getting the Marie Antoinette treatment. . . No decent pics I'm sorry to say.

Posted by Jon Burgess Design at 00:48