Fun with Biscuits etc. Not a Tutorial. A Journey Down My Creative Process, Such As It Is. . .

Start off by having a silly idea while trying to get to sleep.

Wake up in the morning and think "Why not? What have I got to lose?" etc etc and wander into the workshop. After all it is still Lockdown pretty much and you are going slightly nuts like everyone else. . .

In line with the aforementioned silly idea, take some of these. . . 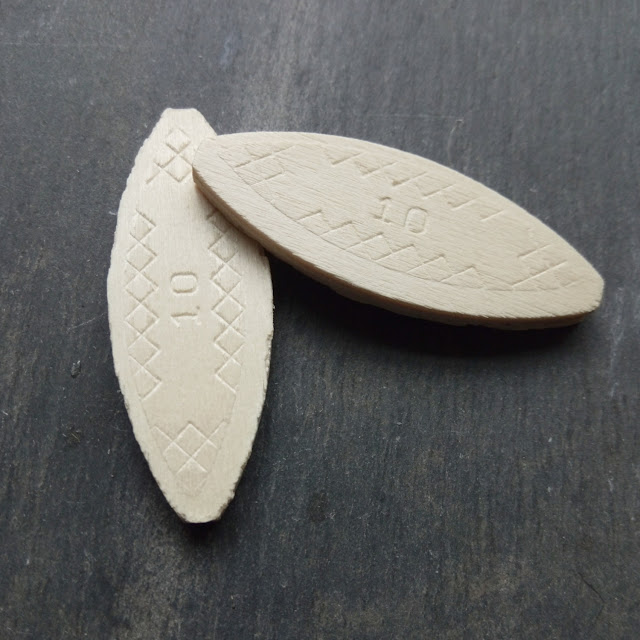 'These' being what are known as 'biscuits', which shouldn't be confused with what are normally thought of as biscuits round here as they are distinctly inedible, even if dunked in really hot tea.
They are in fact small pieces of plywood used to accurately join two sheets of wood, as in a worktop. Useful things, only I didn't get on with them particularly, even with the proper biscuit jointer power tool thingy. I have plenty of them lying around though, and have previously used them every now and then in bead related projects. (I have no idea if Americans call them 'cookies' or not. . . Quite probably. Whatever. . . ) 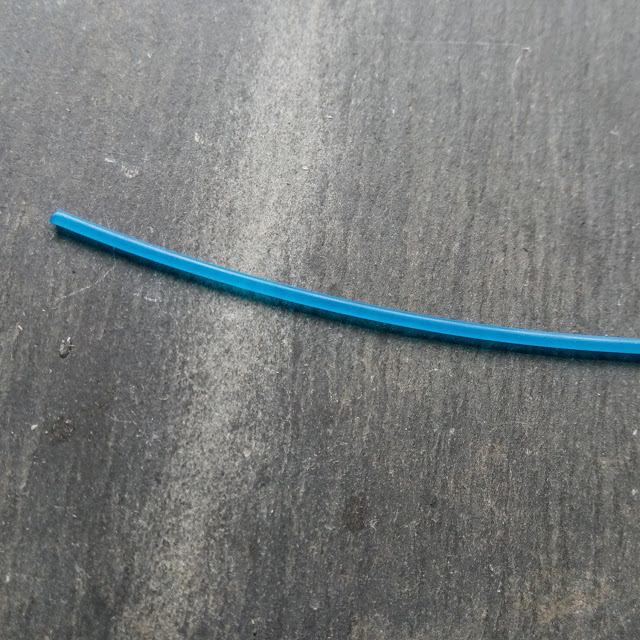 Now take some of this stuff, which is 2mm diameter approx blue plastic 'wire' from the large reel of it to be found in the shed, left by our house's previous owner. I assume it is strimmer wire but I can't be certain, and am not that bothered what it is. I am just aware of it sitting there awaiting some sort of use. (My strimmer uses those little plastic things rather than plastic wire, which though a bit pricey, is so much better. The wire ones are a complete and utter total pain.)

Lay the biscuits on a thin sheet of polymer clay and cut round them. Bake and then glue the resulting poly clay pieces onto the biscuits. Tidy up the edges.

Drill 2mm holes in patterns or at random intervals in the poly clay fronted biscuits.

Cut some short, roughly the same size, lengths of the plastic wire and poke them into the holes in the biscuits. Try different length bits on each biscuit. Look at the results and go "Hmmm.. ."

Decide to paint the biscuits with bright colours that will set off the blue of the plastic bits nicely.

Decide you quite like the results and glue the bits in place.

Sleep on it. Not literally, obviously as that would be a bit spiky.

Next day, decide to see what one of the simpler ones would look like as a pendant. OK, a bit obvious maybe, but worth keeping. Looks like a little scrubbing brush, but in a good way I hope ;-) 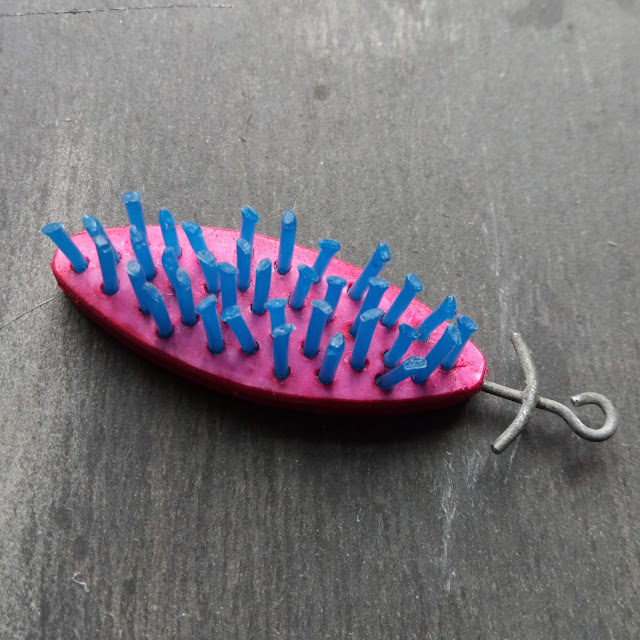 Try one out as a brooch. Kind of funky, but as the plastic bits on this one are quite long the whole thing kind of hangs down instead of sitting nicely on the chest or lapel or whatever.
Try to stabilise it with some upcycled wire grid. That works pretty well. Another keeper. 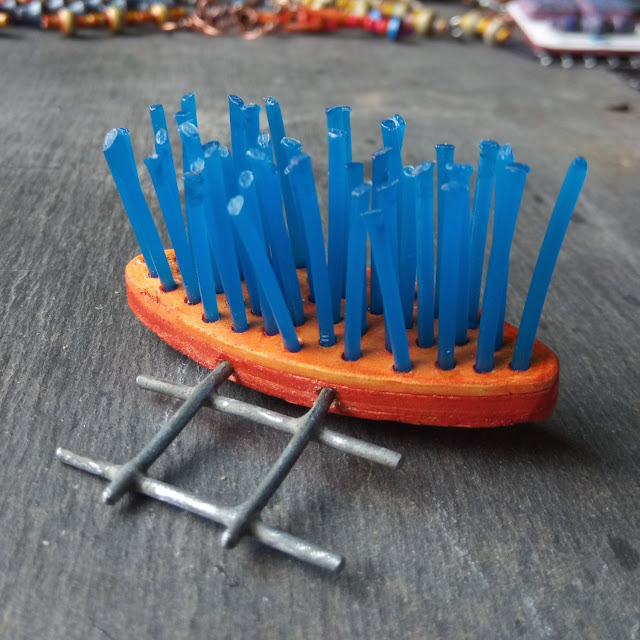 Now, get distracted by the model railway figures you just bought, and ones you had around anyway. For fun, put the two retro, cute kids on the more minimal biscuit as though standing by a fence or somesuch. Nice. But how to use this as a pendant as it's flat and horizontal, not vertical. Maybe a tallish wire loop would do the job and allow the piece to be hung on a chain or something. That could work. I like. . . 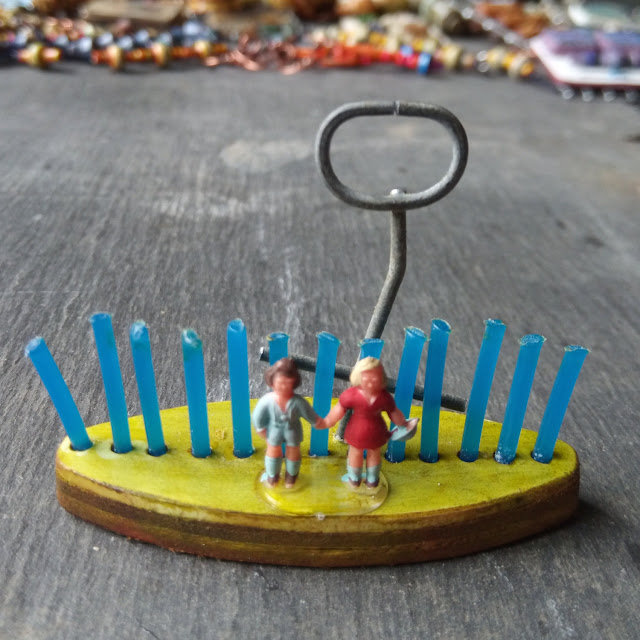 For more fun, put the milk churn carrying man in amongst some shorter plastic bits, like he's walking through grass. How about a wire grid to maybe allow the piece to be strung somehow? The grid obviously needs some electronic components and an image transfer abstract tile to finish it off. The electronic bits also go with his shirt.

I like this 3D effect. The figures have a sort of environment to exist in. 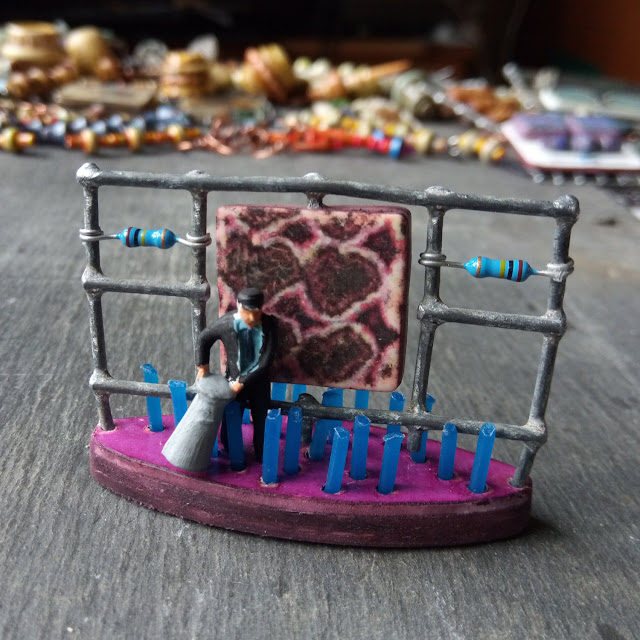 Box carrying man can also get in on the 3D act, with a grid and another image transfer abstract tile above him as he heaves his box through the rather small opening in the 'fence'. 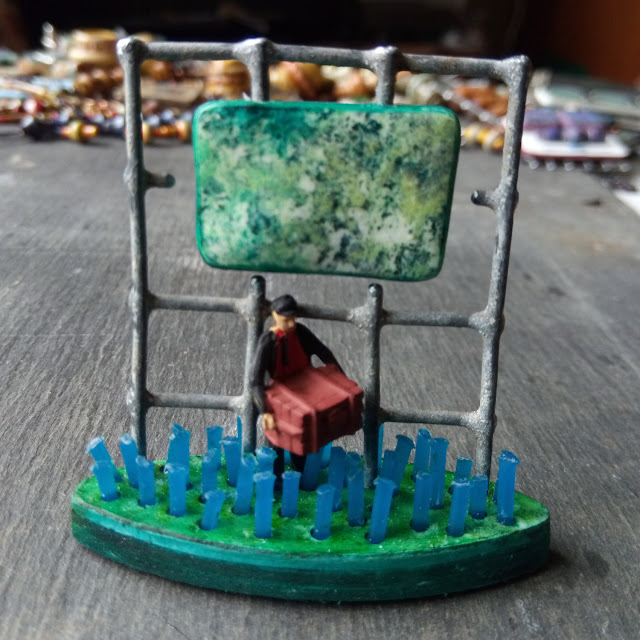 The question "Why?" doesn't need to be asked unless the answer "Because" is sufficient for you, because that's all the reply you will get ;-)

These can be weird pendants or equally weird small ornaments for the mantlepiece.

Now call it a day and wait for the next silly idea. . .

Posted by Jon Burgess Design at 06:01