Moulds, Molds, Bears, Giant Babies and The Cautious Emergence of The Weirdly Absurd 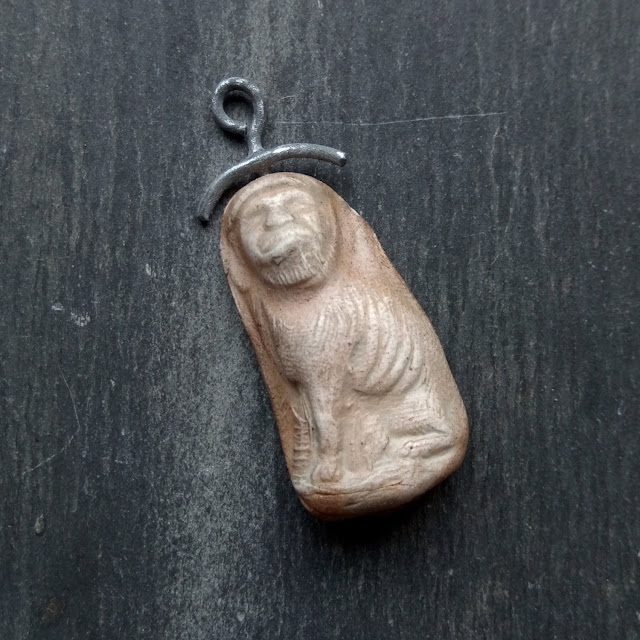 Well, I've been doing the usual thing, neglecting this blog and manically experimenting/pottering.
Allowing that it is possible to potter manically of course - I'm taking the view that it most certainly is. .
The trouble is, as I have probably mentioned before, is that my focus shifts so quickly between projects and ideas that I am into a new idea before I have blogged about the last one. Then eventually, the weight of unblogged about things becomes so great that my Blogger's Guilt kicks in and I try to feature about ten ideas at once.
Oh well, so be it ;-) 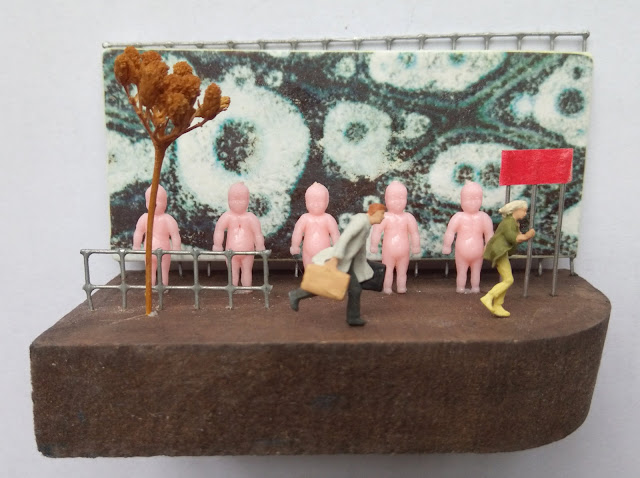 So, first up - You remember the plastic model railway figures from my last post? Course you do. I have made a few more little surreal scenes using them, (in this case some very nice hurrying passengers) and a few very pink plastic babies I came across on the internet (of course). Combined with an image transfer of one of my digital fake-cell-structure creations and a few other bits and pieces this interesting little scenario came about. It's called "Try to ignore The Babies". 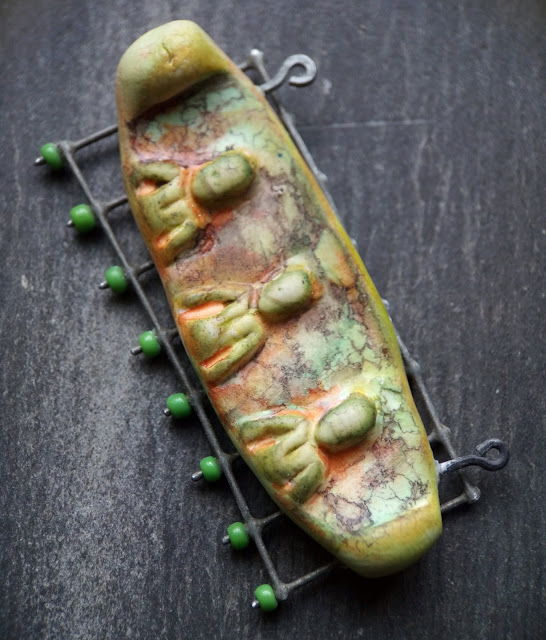 Taking this post to be a vaguely logical progression, I considered said plastic babies and wondered how making polymer clay moulds of  them might work out. Polymer clay does seem to be pretty good for mould making. Non-flexible ones but that is OK. This Baby/Alien piece was made using crude impressions from one of the moulds I made. With some crackle effect technique and additional glass beads. (I was given a box of various small beads from a friend. I didn't think they were the sort of thing I would be using but as it happened they found a place) 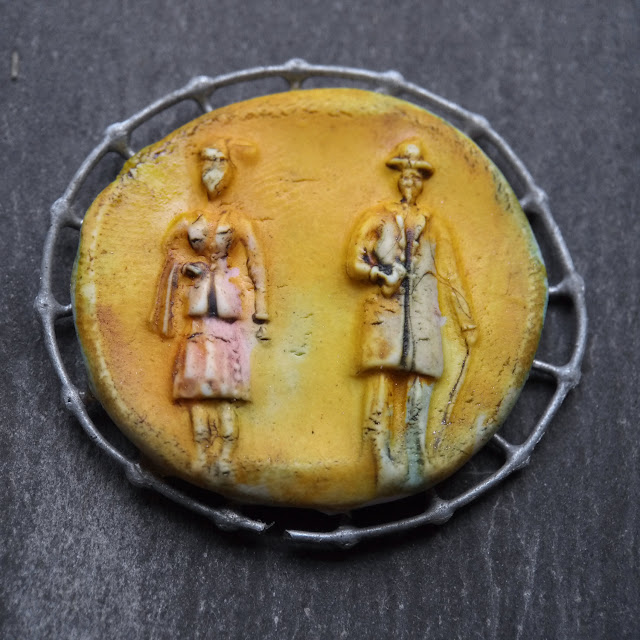 One mould led to another, this time using a couple of model railway figures, which, my creative process being what it is, resulted in some pieces with a very different vibe. Using inks and Ren wax etc etc helped. 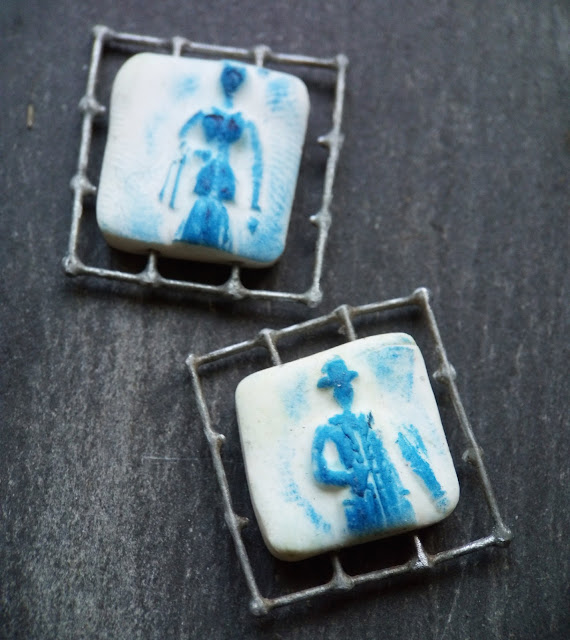 As is the way of these things, before long, some of my little plastic animals got roped in to the mould making frenzy. These two little Red Panda head drops came about that way. 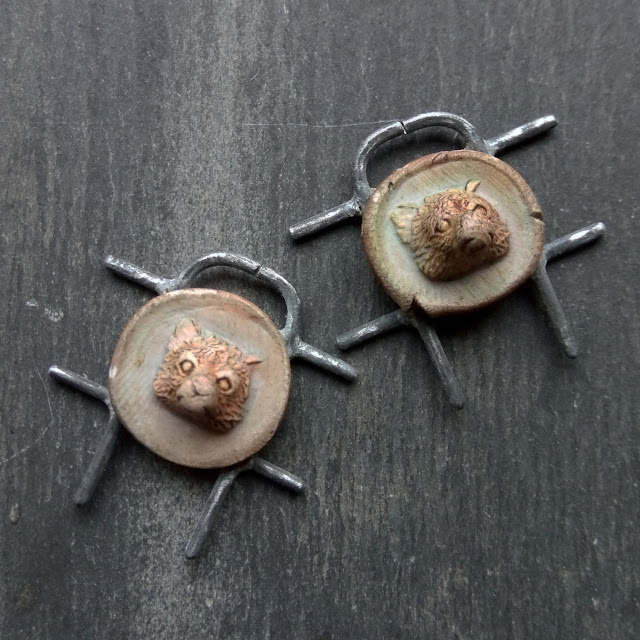 And this Bear pendant. All interesting stuff I thought. 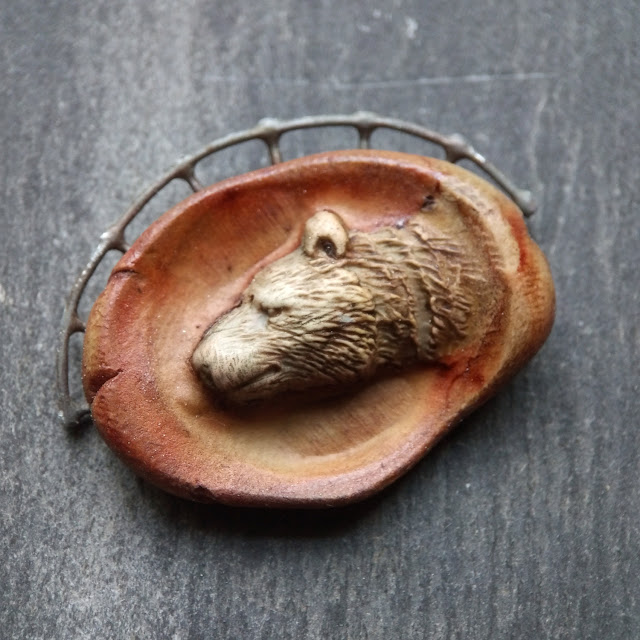 And moving skilfully on, like a smooth radio DJ style link, talking of bears, I made some bear images using a rubber stamp I acquired, and taking sort of multiple, artily out of register monoprints from the stamp's impression on poly clay, which I coloured up in various ways.
I used one of these images as the background for this piece called "Big Bear, Good Dog" ;-) 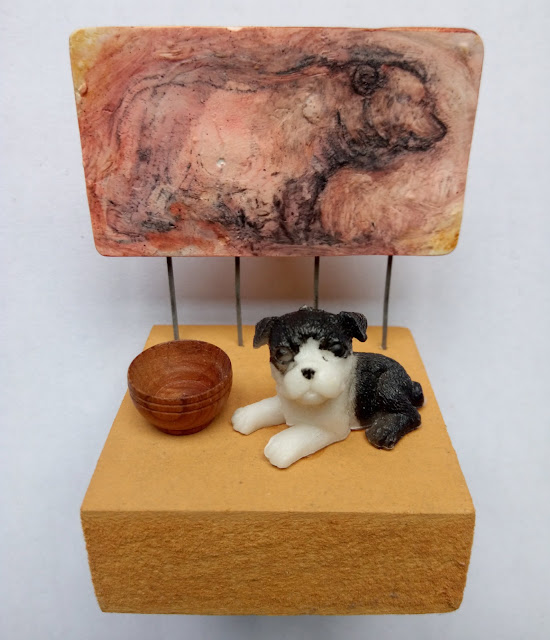 Moulds from the heads of various plastic figures I have had knocking around for years came into the equation also, to somewhat creepy effect. Only somewhat, as the absurd tends to trump the creepy; in the work I do at any rate. Here's a couple of spike beads and drops to emphasise my point. 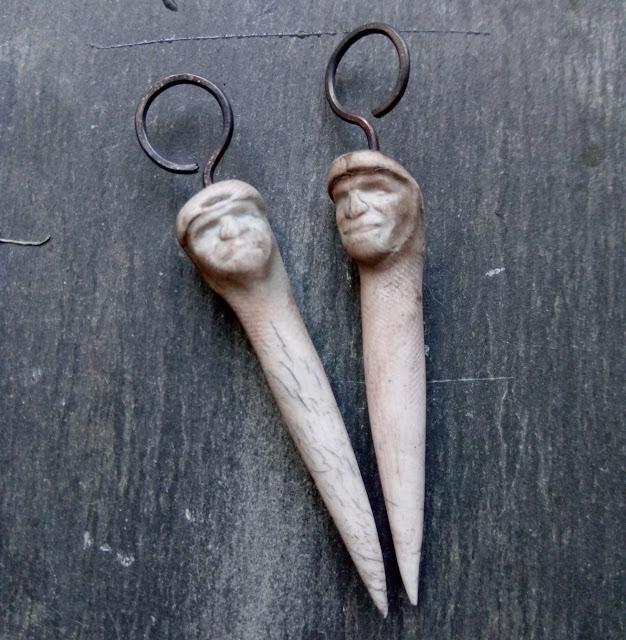 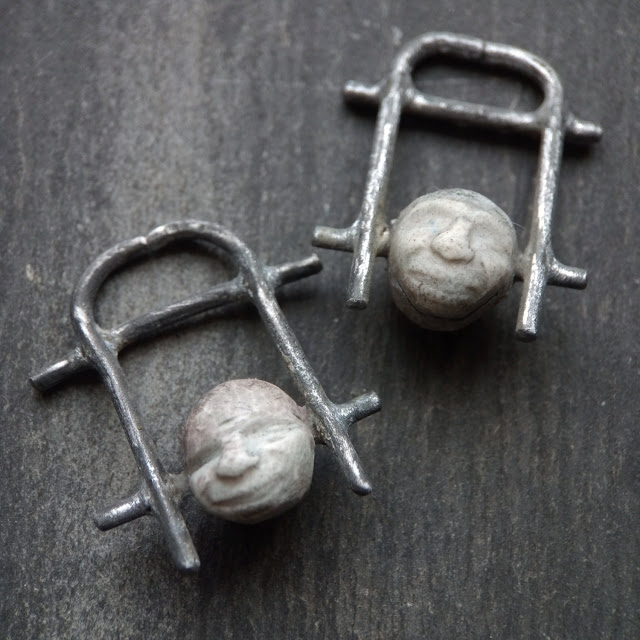 The more observant amongst you will have clocked the strange image at the top of this post. This was me trying to mix and match heads and bodies ;-) The body is from a mould of an unpainted pottery dog blank that I acquired from who knows where, ages ago, and the head is from a plastic motorcyclist. the result is like some very odd artifact from an archaeological site somewhere. No idea idea where that 'somewhere' might be though. . .
So that's me for the moment. Other stuff will no doubt emerge from my fevered brain as this strange time of Covidiosyncratic Groundhog Days grinds on, and on.
Oh well, and talking of 'well', stay well!
best,
Jon x
Posted by Jon Burgess Design at 02:20