Instinct and Round Numbers 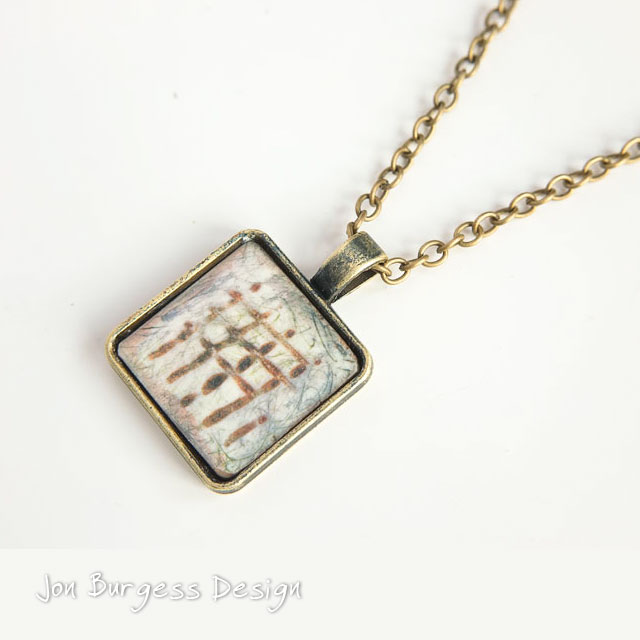 Well I've been kind of busy this last week or two, making stuff and generally following the proverbial fascination, like I do, but with a specific aim in mind. I wanted to have 300 items available in my Etsy shop. A bit of an arbitrary figure I know, but a nice, round one. And anyway, it's quite useful to have a target. Helps the motivation.
It started off well, in as far as not selling very much, therefore enabling me to build up the numbers can be called starting well. . . Then at the end of Feb, and through the first ten days or so of March I sold a whole bunch of stuff, which was great, but dented my intention to get to 300. (If indeed you can dent an intention. Whatever. You know what I mean.) Undeterred, I plugged away, making stuff and listing it, and eventually, despite people insisting on buying things, I got to 300! I also got to 300 sales at about the same time, so cause for double celebration.

I'm not sure whether having over 300 items makes the shop somewhat hard to find specific items in and hard to navigate generally. A lot of supply shops have more than that but I'm not a bulk supply shop. Oh well, I guess if someone is interested enough they will trawl through the goods until they find what they want. after all, it's all wonderful stuff. . .

As you can see, this fascination following I have been doing has been quite productive. I haven't prevaricated. I have been letting my instinct guide me and just got on with it.
For instance, I had been meaning to try my tile beads in actual bona fide, proper square metal bezels, to see how they would look, so I bought a few. I had a tile bead or two hanging a round so I sanded the corners off a bit and stuck it in a bezel. Very nice. 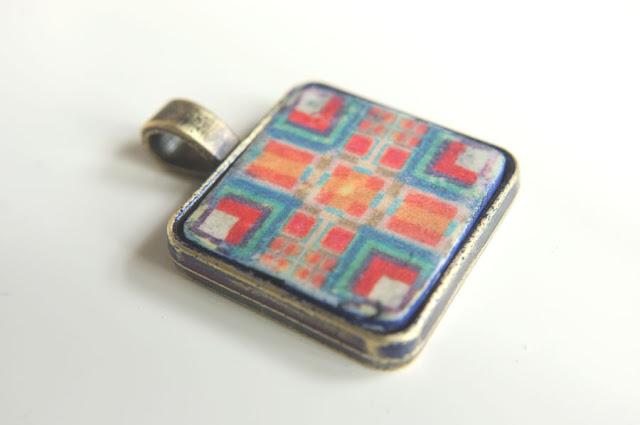 But a couple of blank baked poly clay squares caught my eye and I tried another thing I had been meaning to try for a while. Which was using PVA as a resist. So I painted a simple design on the poly clay square with PVA, let it dry, or rather blasted it with a heat gun as I was impatient, and the heat gun was within arms reach, then painted some indigo alcohol ink onto it. Once that had dried, all I needed to do was peel the PVA off. Only it didn't want to peel off. I picked it off with a finger nail and it had worked fine, the simple design was left white. So I put some more PVA on and painted with a different colour, dried it, picked it off and the result was a rather cool, vibrant coloured, kind of abstract expressionist poly clay square. So I sanded the corners a bit, polished it up and stuck it in a bezel. I also grunged up the bezels with Alc ink and gilder's wax etc, as they were a bit boring left blank, and I wanted to make them 'my' bezels. Not everyone's cup of tea but I like it. A lot actually.

Trusting your instinct is a good habit to try to adopt I think, as when it works, it encourages you to have faith in your creative powers. When it doesn't work you can comfort yourself with the thought that you had the courage to step outside your comfort zone, and each time you do, you learn something useful that staying on the well trodden path wouldn't have taught you.
People go on about knowing when to stop, in the creative process. I think the converse is equally important. Knowing when to carry on, when to keep going and find that flash of inspiration that can turn a seeming disaster into a work of art. Learning from your mistakes and then turning them round. Persistence it's called. 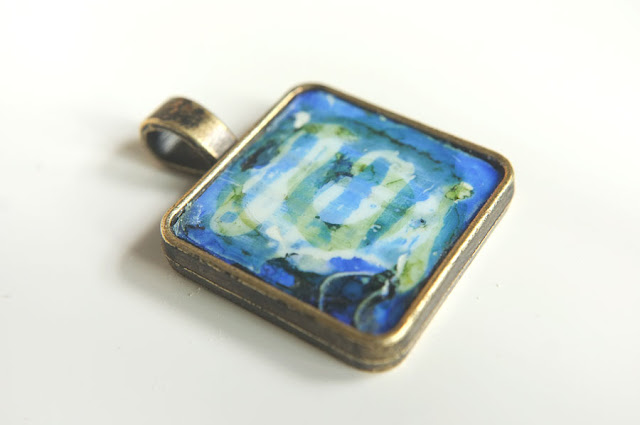 So, encouraged by my success at poly clay squares in bezel making, I used up some more tiles I had knocking around, and worked up some more blank squares into interesting abstracts, either by painting as before, or engraving a simple design and scratching and sanding the hell out of it, selectively. It was fun. I have even made them into simple pendants by sticking each of them on a chain and making a simple clasp. I have put them up in my shop, so we shall see what the consensus from potential buyers is on them.
I was going to write about the other stuff I have been making in my journey to my nice round number but that would have meant an unfeasibly long blog post, and a bunch of bored readers. So I shall bore you with it next time.
J x 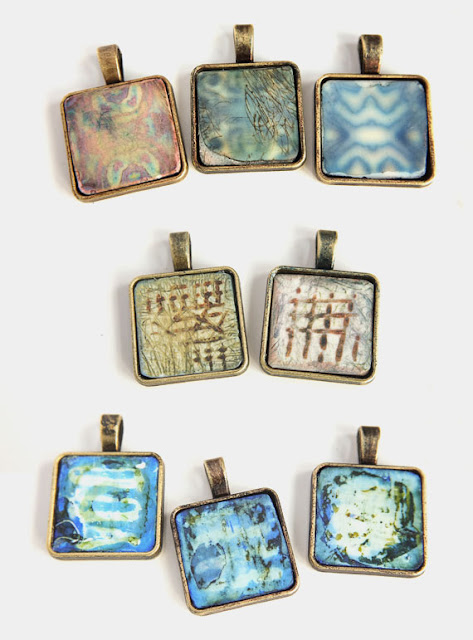 Posted by Jon Burgess Design at 09:35