Through and Through - Rough Image Transfer Adventures 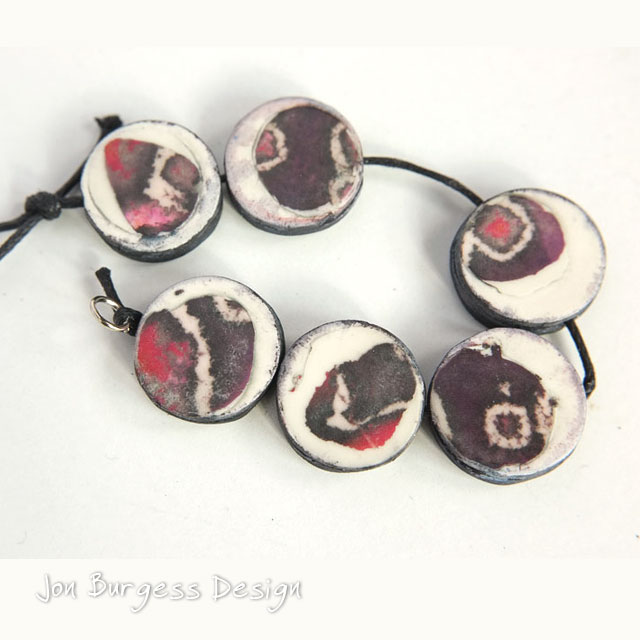 I've been working out various things this past week or so. Refining how to make 'through drilled' or at least, 'through holed' flat tile beads without them having to be unattractively thick. I have got it pretty much sorted.
I bake a thin image trans tile, then press another unbaked blank onto the underneath with a bead pin or similar in between the two layers to provide the stringing hole (once removed, which I do before baking, though afterwards would probably be OK too). The unbaked blank has to be less than the thickness of the bead pin or similar for obvious reasons. The bead is then baked again. This process avoids having to drill a hole through a solid flat bead, which would be a very delicate operation unless the bead was quite thick, which, as I mentioned before would be undesirable.
Not an exact science and not the neatest result in the world, but if I felt it was important enough I could neaten them up more than I choose to. The look suits the general vibe my work has. Kind of artily and enthusiastically rough round the edges, "Rustic". Though that word seems to be less important as a tag according to my etsy stats. . . "tribal" and "boho" get more hits. .
I made smaller versions with the smallest cutter in my set, and made them double sided. It was OK to make them a bit thicker, I thought, as they look quite nice a bit chunky. . . 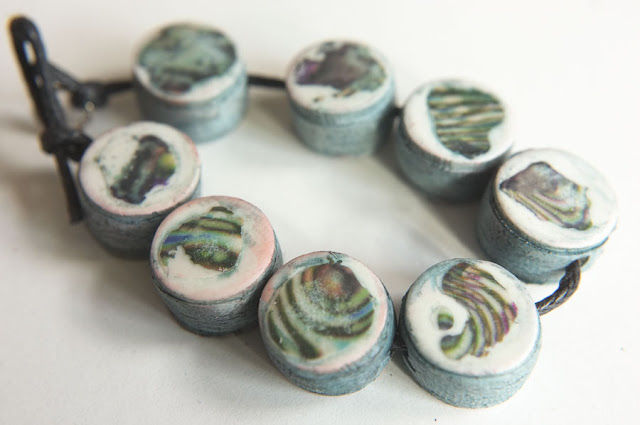 The image trans technique involves using clear liquid poly clay and a heat gun, and is best done outside or in a well ventilated space. Kato polymer clay, which happens to be the trans liquid I have, has a particular smell that I don't get on with, especially when it burns. . . (oops. .) I'm not going to go into details about the technique as you can probably work out what I did. I like the effect, though I shall take a break from my experimenting with images and do something else for a while as I don't want to risk getting too obsessed and repeating myself.
The images themselves are my own digital creations, this time less geometric repeat pattern orientated and more random organic in nature.
They still have this old/new conflict going on, which is fun I think. Ancient looking things with non ancient images on them. 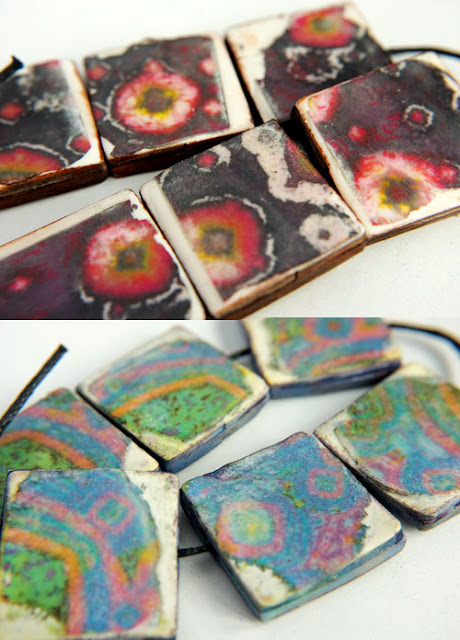 I need to leave image trans for a bit and get back to texture based work I think, but finding new approaches and ideas. That will need some thinking about, and some playing with.
I might list a few more things in my shop and then leave it for a week or so and see what I want to do next.
I'll keep you posted,
Jon x

Posted by Jon Burgess Design at 14:55