Surface treatment - When does 'Distressed' become 'Messed up'?

Is there actually a dividing line? I am really enjoying seeing how close to total irreparable messed-up-ness I can take my image transfer bead 'ageing' process. It's a learning curve, and once you have taken a process too far, you can take a more informed view on how far to take it the next time.

Here's how things start out. Images transferred onto poly clay squares, in this case, using dye sub paper and kato trans liquid. This shot is after baking, obviously. You get a slightly fuzzy, out of focus effect, and some randomly dodgy edges. All of which is fine, as it all adds to the finished look. Neatness can be achieved with more care, if neatness is your thing. 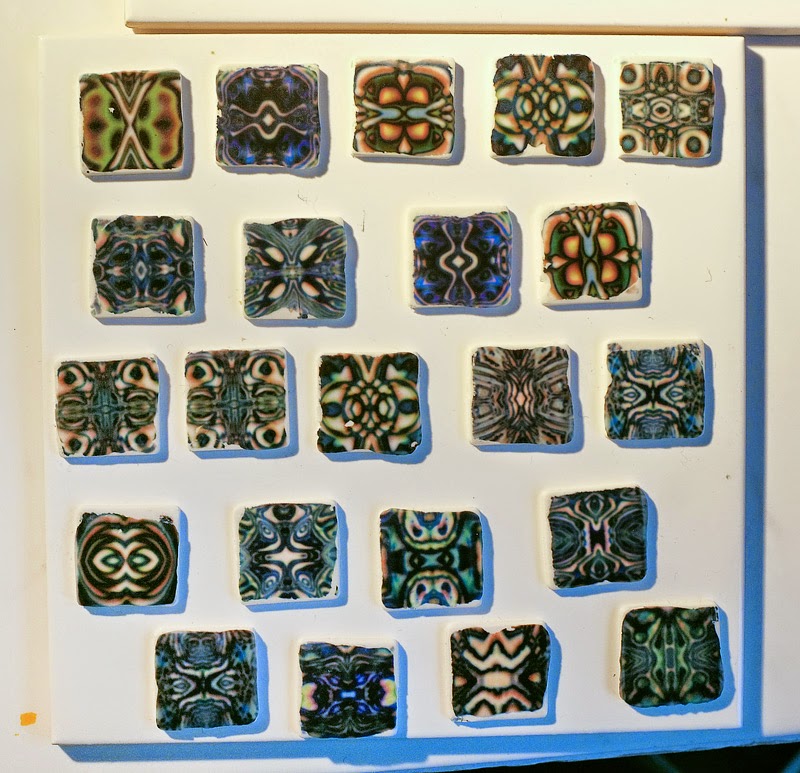 Here's a shot of my desk with some of the above as finished beads, after the 'distressing' or 'messing up', (whichever it is deemed to be) process. 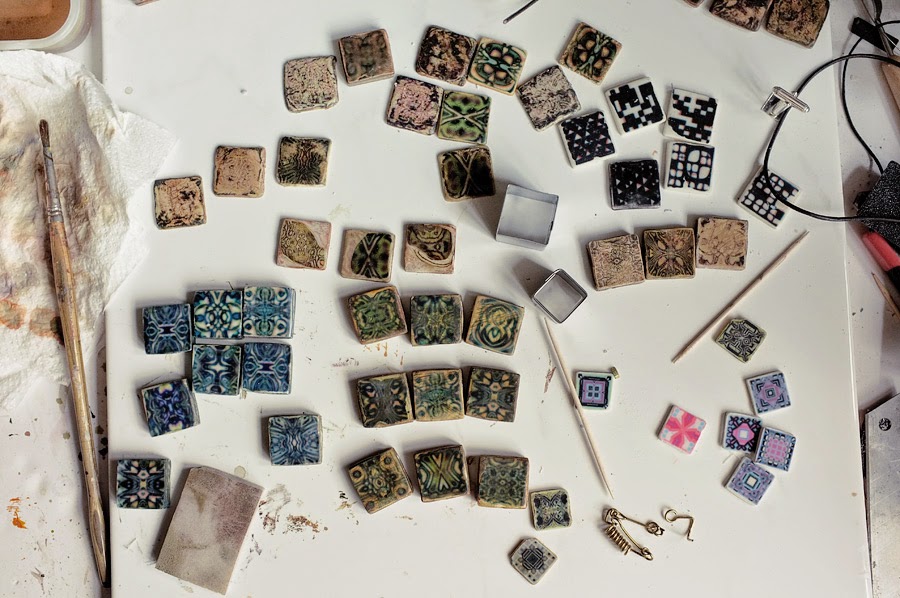 A closer view of the greeny brown ones. Sanded quite hard, as scratching Kato clear is not as easy as plain baked clay. Also, the scratches aren't visible until some darker ink/paint/whatever is applied and encouraged to sink into them. 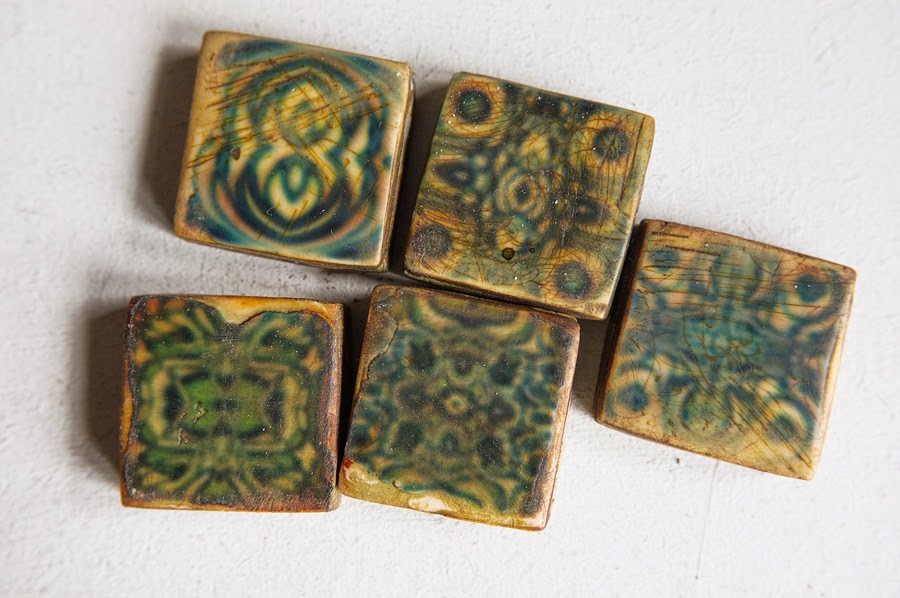 This is what happens when the process is taken a bit further. These beads are slightly different in that the image trans process was the more usual one using a laser copy/print and water on plain white clay, or a 10% kato trans, 90% white poly clay mix. (Images 'stick' better with a bit of trans clay in the mix).
As there is no liquid clay involved, the surface scratches and distresses more easily. The image comes out sharper than the dye sub ones too. The other thing that happens with this method is that when Renaissance Wax is used at the end of the process, and rubbed in, it starts to dissolve the image. If you apply it carefully and leave it to dry for half an hour or so, it will buff up without too much of the image disappearing, but if you rub it in hard and buff up after a couple of minutes a fair bit of the image is removed. I like both effects. The top left bead has almost entirely lost the image, but looks cool all the same. imho. 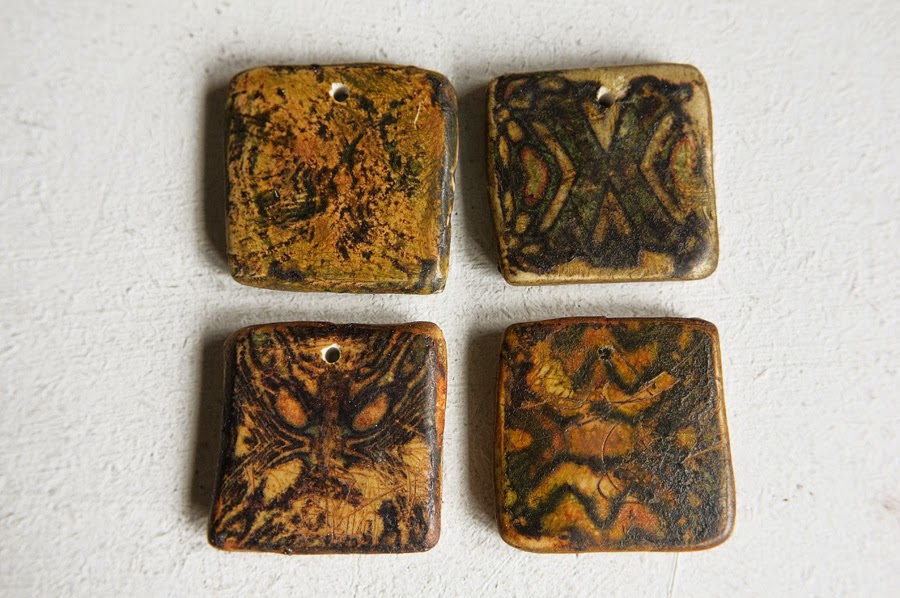 These next ones are where it gets close to or over the dividing line between 'distressed' and 'messed up' that I am wittering on about. I like the kind of 'ghost image' of the pattern in red that gets left on the two on the right. This technique does make me wonder whether I should make some beads with no image on them at all, just madly messed up surfaces. I like the look, and losing the image, as in the bottom left bead, doesn't detract from it's coolness all that much. But overall, the ones where the image is still reasonably discernible are my favourites. How 'bout you? 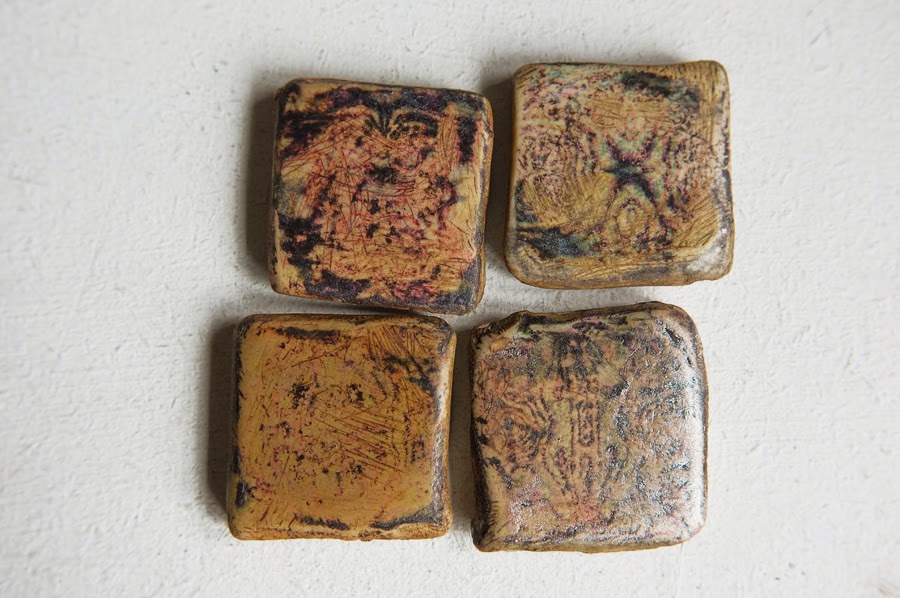 Posted by Jon Burgess Design at 01:19