How Rough and Distressed Can You Stand? More Biscuit Stuff and Actual Shards. . .

The interesting thing was that I could transfer directly onto the wood rather than a polymer clay shape.
(see my last post for an explanation of what these wood shapes actually are)

The other interesting thing is that using this method you don't have to have laser prints, you can use inkjet prints, even on photo paper.

For the charms/beads in the images above and below I deliberately went for a rough, distressed look. I split the wooden 'biscuit' twice, to get a splintered texture on both sides. They are three ply so this is possible, if finicky to achieve. I splurged a bit of Kato Clear on one side, squashed the image down onto that then blasted it with the heat gun for about 20/30 seconds, or until the paper started to go brown and before the wood started to singe. . .

Then I dropped them in water to make the paper easier to scrape off the baked Kato. (the image is transferred onto the thin layer of Kato clear, not the wood base) This was a bit problematic as the Kato started to peel off the wet wood. I let it dry somewhat and then stuck it down with gorilla glue. You may want to wet the paper in a more gradual way, trying not to soak the wood. Lesson learned.

I then painted the wood with alcohol inks diluted with rubbing alcohol to add a subtle tint to it. The backs were painted with alcohol inks or acrylic paint. I varnished them, more to protect the wood than the Kato, as Kato is very tough. Below are some 'half biscuits' I made using the same technique. And the same pattern. . .
Seriously rough and battered looking, especially the ones at the top of this post. Too rough for public consumption? A niche market for sure ;-)
Also the top ones are extremely light weight, not sure if this is a good thing or not. I would probably make a polymer clay backing sheet another time, to add a touch more weight. . . dunno. . .


The ones below are polymer clay fronted, normal image trans method half biscuits, with a cool organic distressed looking image on them, which was of course further distressed by me. . .

I also made some earring charms from actual shards, gasp! Not faux ceramic, but the real thing. I broke one of my image transferred tiles (more about them in my next post), and decided to try filing down and drilling a couple of the resulting shards to see if they might work as earring charms or some such. I think they look pretty good.

Well we have introduced them to the outside world, insofar as our garden counts as the outside world. They have had fun, strictly supervised of course, prowling through the herbaceous border and running madly after each other in that patented kitten way that they have. They had calmed down a bit when I took the pic. Not for long, mind. 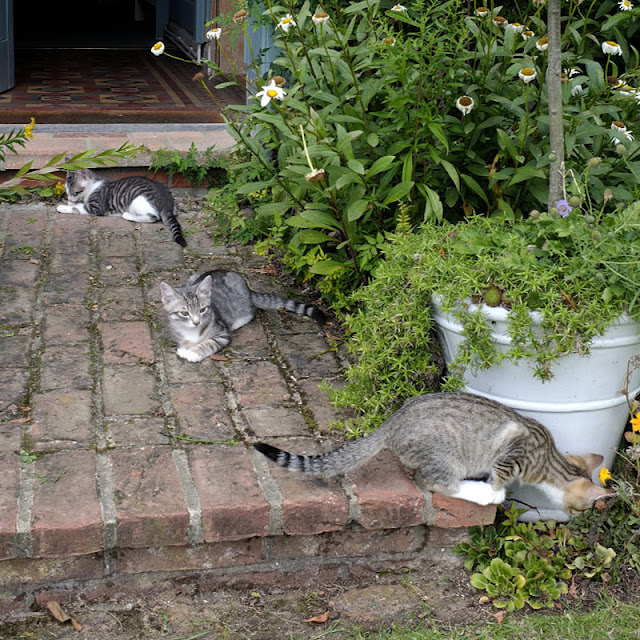 The guinea fowl continue to fascinate. The fascination was mutual actually. The scale is deceptive in the pic as the kitten is smaller than he looks and the guineas are larger.
It all ended amicably with a mutual orderly retreat. Albeit with some less than melodious sound effects from the guineas. . . 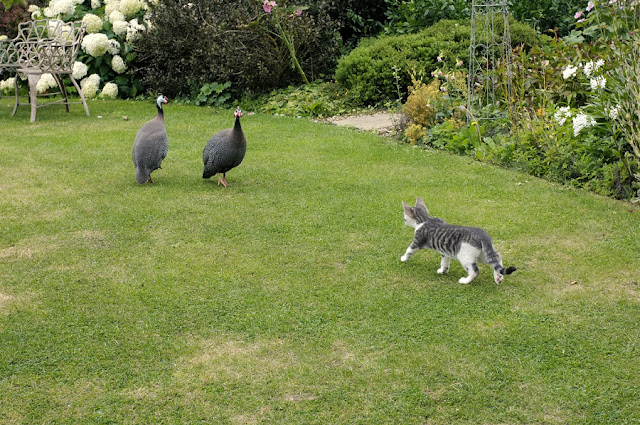 In other news, DIY continues apace but i will spare you the WIP pics for now. I was turned down by Norfolk Craft Soc (humph!) but will (probably) try showing my stuff to some local galleries/shops to see what they reckon. Research is needed.
Anyway, until the next time,
cheers, Jon x

Posted by Jon Burgess Design at 02:06